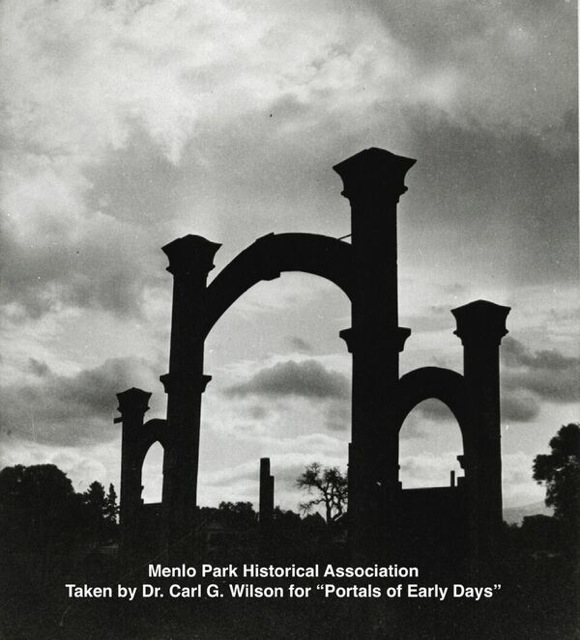 “The landmark…was struck early this morning by two automobiles, filled with singing passengers, which careened down the highway and crashed into the old arch…” The wood “…was rotted and scarcely worth reinforcing…thus it is possible no effort will be made to restore it.”

Until now! Ernst and Melina Meissner, local architects, have volunteered to produce the drawings necessary to recreate the historic Menlo Park gates based on several excellent photographs from about 1900. And a pledge of $500.00 has been made by a Historical Association member Jim Lewis contingent with matching donations totaling the same amount by the end of August.

The original gates were on the west side of County Road (now El Camino Real) just southeast of Menlo Avenue, marking the entrance to the cattle ranch established by two San Francisco businessmen, Irish immigrants Dennis Oliver and Daniel McGlynn. They named their ranch Menlo Park because the area reminded them of the bucolic, Gaelic village of Menlo, which was then just outside of Galway City, and wrote the name Menlo Park in elaborate lettering across the top of the gate.

Thus was born the name of our city. Motivated by this history, Galway City and the City of Menlo Park signed a formal friendship agreement in 2013 and on June 3, 2016, elevated that agreement to Sister City status.

Now the Menlo Gates Committee calls on the citizens and lovers of Menlo Park to contribute the estimated $65,000 needed to construct and install a replica of the gates as a pedestrian entrance to the Civic Center. For this purpose, the Menlo Park Historical Association (a registered 501(c)(3) charity) has established a GoFundMe account for the Menlo Gates Project.