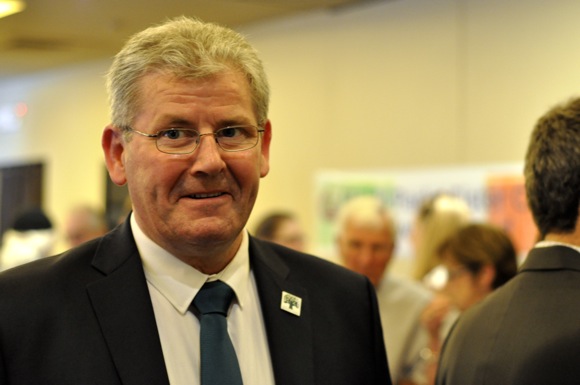 That Menlo Park was recording its hottest temperatures of the year — and well above average for this time of year — was not lost on Galway Mayor Frank Fahy and his wife, Geraldine, who were visiting the Mid-Peninsula town following the signing of a Sister City Agreement in Galway, Ireland on May 19.

“Yes, we are melting,” he said amicably at a reception for the couple hosted by the City of Menlo Park at LB Steak last night.

The evening event culminated a very busy day (in the heat) for the Mayor and his wife. They’d been serenaded by school children at Oak Knoll and visited a couple of startup incubators as well as City Hall. Mayor Fahy had been particularly looking forward to visiting Facebook, which he called a “great experience.” 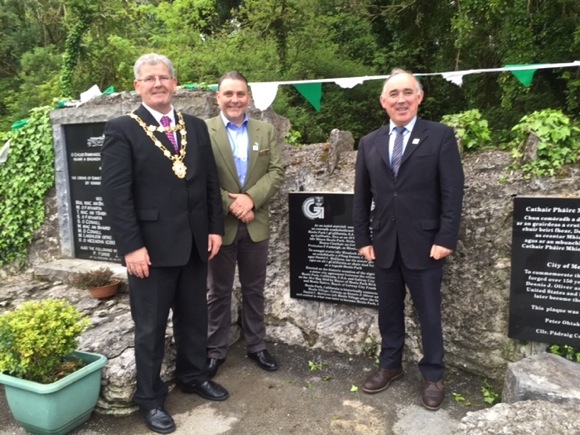 The agreement highlighted the historical bond shared between the two cities going back over 150 years ago when two Galway men, Dennis J. Oliver and Daniel C. McGlynn, from the village of Menlough near Galway, traveled to California and purchased a ranch they called Menlo Park.

“The original founders of Menlo Park left my home village of Menlo after the famine, and my ancesters have lived in Menlo since 1640 and would have known Oliver and McGlynn,” posted Mayor Fahy on Facebook following the signing of the Sister City agreement with Menlo Park.

Jim Lewis of the Menlo Park Historical Association provides some additional background: “Gerry Hanley was part of a Welcoming Committee when former Menlo Park Mayor, Peg Gunn, traveled to Galway, Ireland in the 1980’s. Gerry traveled to Menlo Park in 2013 to learn more about us and introduce the idea of a Sister City Agreement. It worked, with a Friendship Agreement initially, to get better acquainted, and now a formal, long lasting, Sister City Agreement.”

For more on Menlo Park’s Irish roots, read Patrick Killelea’s account of his visit to Menlough near Galway.

Caption for second photo: Galway Mayor Frank Fahy, Menlo Park Mayor Rich Cline and Galway citizen Gerry Hanley photographed in Galway, Ireland, at the unveiling of a Commemorative Plaque in honor of the historic signing of the Sister City Agreement between Menlo Park and Galway.