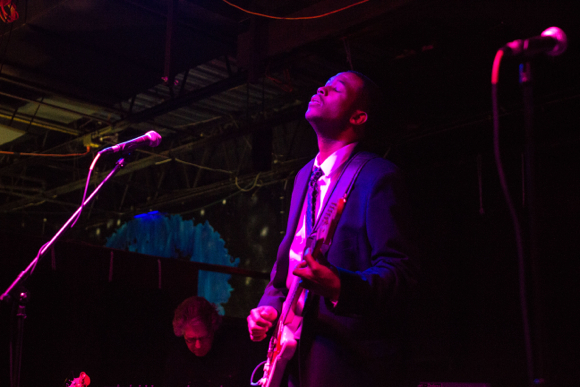 One locally-raised musician now finding success with a band in Lexington, Kentucky, is making good on his promise to put on a show where his career first got started here in Menlo Park.

Explains Kathleen Daly, owner of Cafe Zoë: “DeBraun Thomas grew up in the area, attended Menlo-Atherton High School and was the first musician to ever play at Cafe Zoë eight years ago. His mother still lives in the neighborhood.

“I always tell the young musicians when they get famous to try not to forget that little cafe in Menlo Park where they used to play. He never forgot us and will return to play this Friday night [around 7:00 pm].”

DeBraun started playing in bars with his father, who had moved to Santa Rosa. “I took formal guitar lessons but playing with my Dad taught me how to carry myself from a professional standpoint by watching how good musicians played,” he said.

“My Mom stayed in Menlo Park and would always have music on in the house and driving me to school when I was a kid. I heard everything from gospel to soul to funk and jazz.”

In 2009, DeBraun moved to Lexington, Kentucky to attend the University of Kentucky. He graduated in 2012 and has been focusing on music in addition to working at the local NPR affiliate WUKY.

Since 2013, he’s been performing his original music as the DeBraun Thomas Trio featuring Lexington veteran musicians Smith Donaldson on bass and Daniel Mohler on drums. His influences range from artists like Jimi Hendrix to Otis Redding, and he describes his music as Rock ‘n Soul.

DeBraun released his first solo album, All My Colors Are Blind in 2015 but soon after  broke his pinkie finger. “I was unable to play for about a month and a half,” he said. “I look at it as God telling me to slow down. Now I appreciate everything in an entirely different way. I play as if it’s the last time because I never want to have a feeling of not playing again.”

He expressed excitement about playing at Cafe Zoë: “That whole block is mostly the same, and it’s so cool to be coming home. I can’t believe it’s been eight years!”

In addition to the cafe, DeBraun will be playing with his trio at the PAL Redwood City Blues Festival on Saturday.