A visit to The Hawthorns, a bit of history hiding in plain sight in Portola Valley 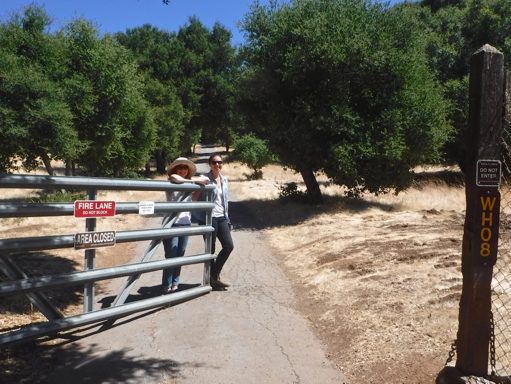 We were in good and knowledgeable hands during a walking tour of The Hawthorns in Portola Valley, thanks to Alex Von Feldt (left in photo above), who is both a town resident as well as Director of Grass Roots Ecology, formerly known as the Acterra Stewardship Program. An engineer by education with a professional background in high tech, Alex views her role as land conservationist.

The 79-acre Hawthorns property is tucked between Alpine and Los Trancos roads and is officially part of the Windy Hill Open Space Preserve. According to the Midpeninsula Regional Open Space District, which manages Hawthorns, the residential and agricultural complex was developed in the late 19th and early 20th century by the Allen and Woods families. 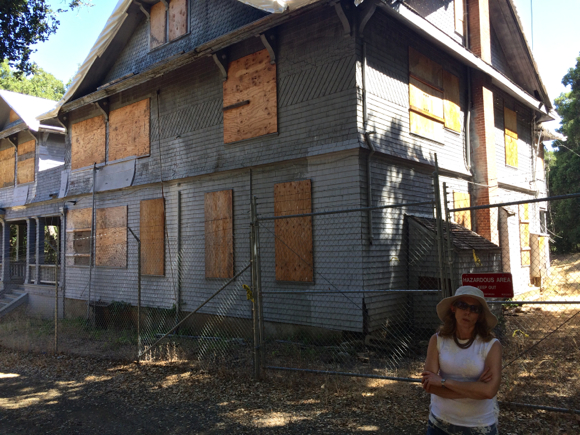 At one end of the property sits Hawthorns House, which was constructed in 1887. While long abandoned, there is discussion about restoring the 9,000 square foot structure for reuse. A number of other buildings also remain as well as an overgrown olive grove. A residence built in 1952 will soon house one of MidPen’s rangers and family.

Unlike its much larger neighbor, Windy Hill, Hawthorns is closed to the public. “But we have volunteer workdays and once a year lead a public hike,” Alex explained.

Added tour co-leader Kristin Williams (right in top photo), project manager at Hawthorns: “And we always like to include an educational component while we work.” 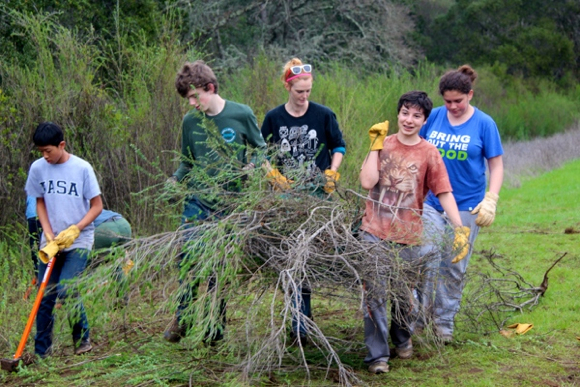 One major focus of their conservation efforts is habitat restoration, which includes keeping invasive plants in check. “At Hawthorns, our focus is the removal of French broom on the property,” said Alex. [Note: according to the California Invasive Plant Council, infestations of broom degrade the quality of habitat for wildlife by displacing native forage species and changing microclimate conditions at soil levels].

Our tour leaders told us that getting youth involved is a speciality of their organization. “About 75% of our volunteers are teens and young adults,” Kristin said. Information about Grassroots Ecology volunteer opportunities is available online.

In October 2013, the Midpeninsula Regional Open Space District released a lengthy report titled Hawthorns Historic Structures “to assess the potential historic and cultural significance of the property by applying the National Register of Historic Places criteria of evaluation, determining contributing and non-contributing historic features and elements, assessing the property’s integrity, and providing guiding information for both the conditions assessment and re-use feasibility study.” That may sound dry, but for local  history buffs, the resulting document is an interesting read.