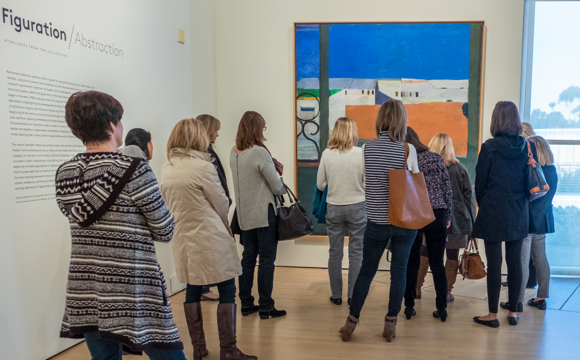 From time-to-time InMenlo has explored “nearby,” meaning people, places and organizations that aren’t rooted in our coverage area of Menlo Park and Atherton (with occasional forays to Portola Valley and Woodside). In the “nearby” vein, a recent late afternoon adventure got us thinking about ways to experience San Francisco without leaving the Peninsula.

No need to go to the DeYoung or Museum of Modern Art in the City when you can view sketches and paintings by Richard Diebenkorn at the Cantor Arts Center on the Stanford campus. According to Wikipedia, “In 1940, Diebenkorn entered Stanford University, where he met his first two artistic mentors, professor and muralist Victor Arnautoff, who guided Diebenkorn in classical formal discipline with oil paint; and Daniel Mendelowitz, with whom he shared a passion for the work of Edward Hopper.”

Indeed, some of Hopper’s paintings are shown along one wall to underscore that artist’s influence on Diebenkorn’s representational work.

On exhibit through August 8, 2016, is Richard Diebenkorn: The Sketchbooks Revealed, although for those who are more stay-at-home inclined all the sketches are available to view online. Also on display at Cantor are a number of the artist’s paintings (photo top) in the museum’s contemporary and modern collection.

Satisfied with our San Francisco-style museum visit experienced during Cantor’s extended opening hours on a Thursday evening, we then headed to what’s been described by Zagat as one of the “hottest restaurants to open in 2016” – Bird Dog – in downtown Palo Alto.

Writes restaurant critic Michael Bauer in the San Francisco Chronicle: “Friends who live on the Peninsula repeatedly complain that the restaurant options lag far behind what they can find in San Francisco. While this area may be the center of creativity in terms of technology, you’ll find little of that spirit behind the stoves.

“Robbie Wilson is taking up the challenge of trying to give Palo Alto a restaurant that competes with what San Francisco has to offer.”

Reviews suggested “must order” include wood-grilled avocado, fried chicken thigh with uni-egg yolk dip, and any fish crudo, and we tried and liked very much the first two along with two other delicious sides — spinach and farro, whose tastiness far exceeded their menu descriptions.

All in all a great Peninsula adventure that eliminated a couple hours of driving and headaches finding parking in the City  (at least on this Thursday summer evening in Palo Alto, there was plenty of space in a downtown garage).

I went ,with some of my family to the
modern museum yesterday. It’s always
a sure fire hit with people that have
not been before. Whenever someone
new comes to town this museum is their
first treat. I have been about ten times
. It doesn’t take too long to view the
pieces and the experience is definitely
worth the trip.