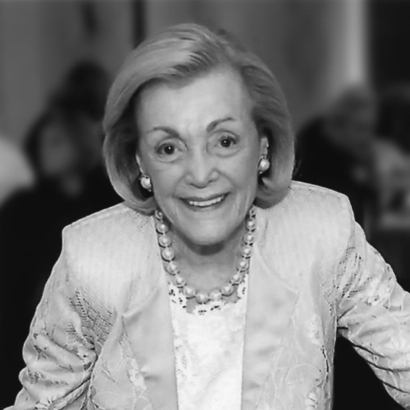 Long-time Peninsula resident Roslyn Grossman Morris passed away on July 26. Her family will host a Celebration of Life on August 17, 2016, from 4:00 pm to 7:00 pm at the Roslyn G. Morris Activity Center at Little House, Peninsula Volunteers, 800 Middle Avenue in Menlo Park.

Roz, as she was known by, was born April 15, 1927, in Oakland. She is survived by her husband of nearly 66 years, Mervin G. Morris, and by her four children and daughters-in-law, Diane Morris, Jeff and Missy Morris, Jim and Susan Morris, and John Morris as well as 14 grandchildren, five great grandchildren, and by her brother, Arnold Grossman.

Roz, born Roslyn Lila Grossman, was the only daughter of Bertha and Harry Grossman. She was raised, along with her brother, in Napa, California. Roz graduated from Napa High School in 1945. She then attended U.C. Berkeley.

Roz met her future husband, Merv, on a blind date in the spring of 1950. They both grew up in retail families and soon recognized they were meant to be. They wasted no time in starting their extraordinary life together, marrying in San Francisco on September 10, 1950. Roz and Merv welcomed four children into their family. Roz devoted herself to raising her children and being a supportive partner to Merv as he built his successful retail business, Mervyn’s.

Roz also cultivated her own interests and passions. Starting in 1962, Roz was a dedicated member of Menlo Park-based Peninsula Volunteers, which provides essential services to members of the community as they age. She served as President of the organization in 1980. The Activity Center for Peninsula Volunteers’ Little House is named in her honor.

She was also involved in supporting the arts in San Francisco and on the Peninsula. In recognition of her many contributions to the community, Roz received the Leading Citizens Award by the Boys & Girls Club of the Peninsula in 1999.

Roz had an exquisite sense of style and was a gracious entertainer, whether it be birthday parties for 400 people or ladies’ luncheons celebrating the milestones of her friends and family. She loved cheering on the Giants baseball team. Roz remained a Cal Bear fan to the end, delighting in sharing her Cal cheerleader doll with her great granddaughters when they came to her home for a visit.

She was the epitome of elegance. She favored snails and could often be seen sporting her statement snail necklace. Roz was an enthusiastic traveler. She particularly enjoyed her trip to India, her many visits to Paris, and her family vacations to the Big Island in Hawaii.

Roz kept up with the news and enjoyed reading multiple newspapers every day. Even in her later years, as Alzheimer’s disease impaired her memory, she always knew about the latest developments in the San Francisco community.

Most importantly, Roz deeply loved her family. She hosted birthday parties for her grandchildren and saved every card they sent to her. She always had an inviting bowl of lime green jelly beans placed right at the level where her grandchildren could reach them.

She regularly attended performances at the San Francisco Opera and the San Francisco Symphony with her brother. She loved to travel with her family and would pop in, even if just for a few days, when her children and grandchildren were on vacation.

She always made sure that Merv was well taken care of, whether it be picking out a tie for him in her favorite shade of lavender or ensuring that their home was a welcoming place for family and friends to gather. Roz treasured weekly Sunday dinners with Merv and her children, grandchildren, and great grandchildren.

Roz was the matriarch of her large and loving family. Through her community involvement, dedication to loved ones, appreciation of the arts, and acknowledgement of the good fortune that life showed to her, Roz was an impeccable example of a life lived with meaning and, most importantly, with love. She will be greatly missed by all who knew her.

In lieu of flowers, if you wish, the family asks that donations in honor of Roz be sent to Peninsula Volunteers – Roslyn G. Morris Memorial Fund, 800 Middle Avenue, Menlo Park, California 94025.