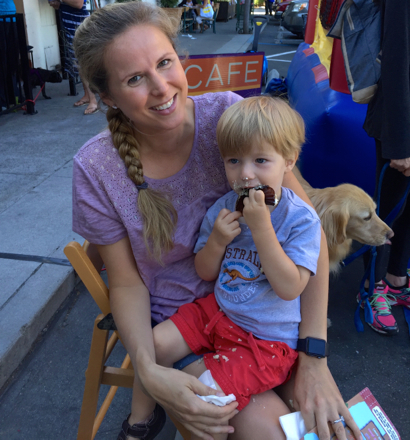 Cafe Zoë, on the corner of Menalto and Gilbert, has long been a cherished Menlo Park hangout. Indeed, the cafe’s motto is “a place for peace, hope, and community.”

For the past four years, along with neighboring businesses, Cafe Zoë has participated in an event known as National Night Out, sponsored by the National Association of Town Watch and designed to increase community awareness of anti-crime efforts.

It’s been celebrated the first Tuesday of August every year since 1984. The celebration at Cafe Zoë on August 2nd included a bouncy house, a blow-up slide, food and drink, and a crowd favorite — cupcakes baked by Beth Ann Goldberg of Studio Cake around the corner.

Local law enforcement officers, who attended the festivites at Cafe Zoë, are regular customers of the cafe. “We know their drink orders,” said the cafe’s namesake Zoë Sharkey, and National Night Out is a way to combine the cafe’s roles of supporting the community and law enforcement alike.

Zoë’s favorite part of National Night Out is “bringing these two roles together, even though they’re not so separate.” 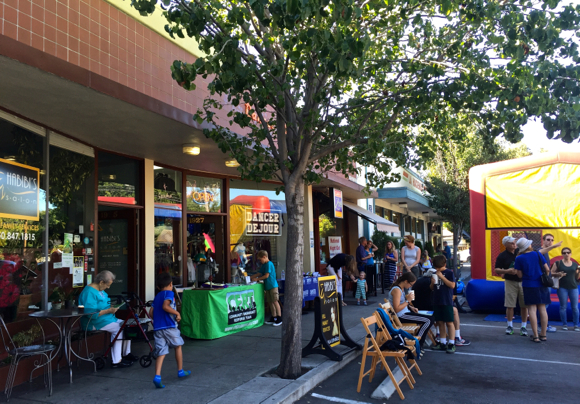 The significance of events such as this, in the words of Bob Jonsen, Chief of Police, is that they “provide an opportunity for law enforcement and the public to interact in a non-enforcement situation.” As Erik Ybarra of West Bay Cleaners puts it, these events “build a bridge between police and the community.”

In light of recent conflicts between individuals, communities, and law enforcement officials, events like National Night Out are invaluable to the preservation of unity and peace. Cafe Zoë’s owner Kathleen Daly said that “nothing is more important right now than a sense of community, in your own neighborhood, city, state, or even in the world.”

Zoë believes that by sponsoring National Night Out, Cafe Zoë’s employees “are not quite changing the world, but…changing the minds of [their] beloved community.”