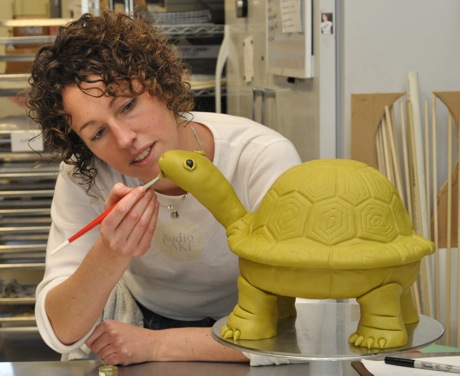 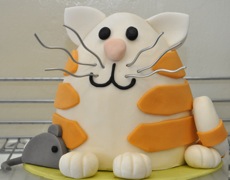 Beth Ann Goldberg is the proprietor of Studio Cake, a not-quite-two-year-old business in Menlo Park’s Willows neighborhood. Aptly named, the 750-square-foot storefront is not so much a bakery as a studio where the talented Ms. Goldberg carves, molds, brushes and otherwise brings whimsical creations into floury being.

Studio Cake has been profiled on The Martha Stewart Show and Ms. Goldberg’s creations have been featured  by many local media – not bad when one considers that Ms. Goldberg was trained not as a pastry chef, but as an engineer, and had worked at NASA and Applied Materials after graduating from Stanford.

Ms. Goldberg started baking as a way to de-stress after work, and found herself bitten by the cake bug after making a green caterpillar for her daughter’s first birthday.  Friends soon began clamoring for her creations, and the mother of two began making custom cakes in the tiny kitchen of her nearby home.

Finding little fulfillment in the engineering field, Ms. Goldberg eventually decided to make the jump to her present professionally-equipped studio space where, with the help of an assistant she produces turtles, octopi, ladybugs, sports cars, pirate ships and virtually anything else her clients can imagine.

Studio Cake, which originally produced only custom creations (starting at $350) has just introduced a line of less expensive ($175) cakes like the cat and mouse, above.