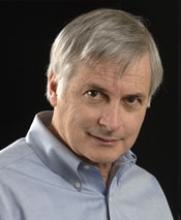 Shostak says that new approaches to detecting life suggest that there is good reason to expect a discovery of microbic organisms on other worlds soon, and that we could uncover evidence of sophisticated civilizations –“the type of aliens we see in the movies and on TV”– within a few decades.

The Mountain View-based SETI Institute was founded in 1984, with a mission “…to explore, understand, and explain the origin and nature of life in the universe, and to apply the knowledge gained to inspire and guide present and future generations.”

Shostak has an undergraduate degree in physics from Princeton University, and a doctorate in astronomy from the California Institute of Technology. For much of his career, he’s conducted radio astronomy research on galaxies and has published approximately 60 papers in professional journals. He has authored over five hundred popular magazine, newspaper and web articles on various topics in astronomy, technology, film and television.  His most recent book is Confessions of an Alien Hunter: A Scientist’s Search for Extraterrestrial Intelligence (National Geographic).

Love the science and thinking!

I hope astronomers are looking for signals of any transit planets around tabbys star, specifically around a mars like orbit; that would be the habitable orbit around this f type star.

What is the possibility of a non natural source blocking tabbys star light? No dust cloud detected and the comets theory seems not be plausible.

This is a wonderful thing the library is doing.
Thank you,
Celeste Wiberg
Menlo Park