Jazzy tribute to Dr. Herb Wong at Kepler’s with launch of new book 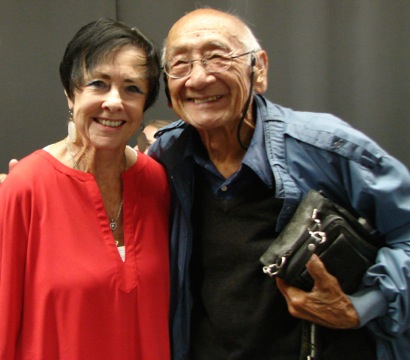 The launch of a new book, Jazz On My Mind, Sunday afternoon (8/7) at Kepler’s, celebrated Dr. Herb Wong’s life-long love of jazz. Friends and jazz fans from throughout the Bay Area were treated to readings from the book by co-author Paul Fingerote, former marketing director of the Monterey Jazz Festival, and to several jazz favorites performed by Julian Lopez on keyboard and singer Jamie Zimmer.

Long time Menlo Oaks resident, Dr. Wong (1926-2014) was an internationally recognized jazz industry leader and author of more than 400 liner notes from the 1940s through the early 2000s. He was also a DJ at radio station KJAZ for 30 years.

The book features the best of Dr. Wong’s liner notes, articles and album selections, his personal stories about the artists, and his illuminating one-on-one conversations with many jazz greats.

One little  known fact about Dr. Wong is that while a school administrator in the 1960s, he developed a jazz curriculum for the Berkeley School District’s primary classes. It all began with his discussions with youngsters about the tune, Take the ‘A’ Train, and culminated with a concert he arranged and produced to benefit the district starring the Duke Ellington Orchestra.

“That’s what was so unique about Herb,” said his wife Marilyn. “Jazz was always on his mind, from childhood until his death, and he helped bring it to many who didn’t realize it was on their minds, too.”

Marilyn,
Thanks for the photo and I would like to buy the book. Can it be had at any book store? I’m so glad the book signing was a huge success. I hope you are well. Love, Faye