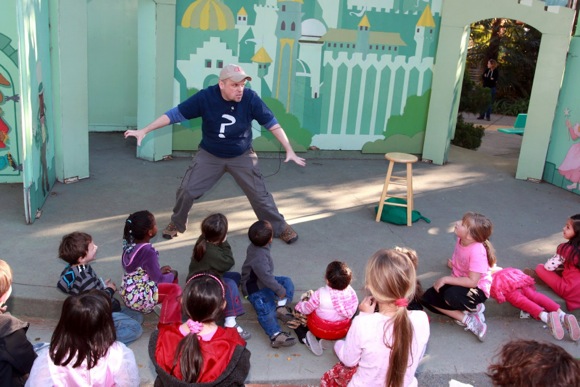 The Menlo Park Library is kicking off a new series of storytelling performances featuring its own resident tale-spinner, storyteller John Weaver (pictured).

Storytelling is different than library story times. Storytelling is telling stories — without using a book. It’s an ancient art form that predates libraries, and books, and writing.

According to the National Storytelling Network, “storytelling is the interactive art of using words and actions to reveal the elements and images of a story while encouraging the listener’s imagination. In storytelling, the listener imagines the story.”

Storyteller John Weaver is a parent, performer and Early Childhood Educator who performs at schools, libraries, museums & other institutions throughout the Bay Area and well beyond. John’s energetic, interactive, humor-filled performances aim to capture the attention and imagination of all ages. He seeks to educate and encourage families to continue the adventure at home by sharing stories & reading together.

The library promises captivating, hilarious spins on fables and folklore, all told without a book. Recommended audience age level is grade school on up. Performance dates are the following first Thursdays at 4:00 pm:

The performances will take place in the library’s downstairs program room. No preregistration is necessary. The Menlo Park Library is located at 800 Alma Street at Ravenswood in Menlo Park.