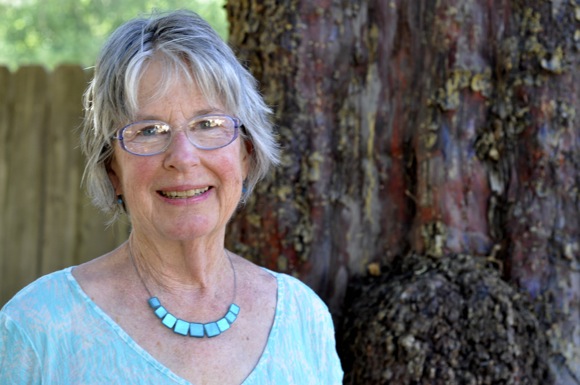 Susan Samuels Drake grew up on Walsh Road in Atherton, graduated from Menlo-Atherton High School and then attended Occidental College. It was a life, she says, that was both “white and privileged” —  hardly the background that would lead to working for and volunteering with the California farm workers movement in the ’60s.

“Looking back, when I  headed down to Oxy, my main thought was getting a ‘Mrs.,'” she recalled when we talked to her shortly after she attended her 60th M-A reunion. “I met Jim Drake at college, and it was his work with the California Migrant Ministry that led us to the farm workers.”

That was soon after Cesar Chavez began his organizing efforts. “He was very quiet and didn’t speak much at all,” said Susan. “Before moving to Delano, I’d met one Mexican in my life, a migrant kid who worked at Webb Ranch and went to my grammar school.”

In the 10 or so years Susan spent working with the farm workers, she was Chavez’s secretary for two and a half years. “He fired me in 1973,” she said. “Loyalty was a big deal to him and during a contract dispute, I voiced my opinion that he should sign with the growers who wanted to sign, but he wanted all or nothing. He didn’t want just a few of the growers on board. So he let me go.”

We asked her if working with the farm workers and for Chavez has had a lasting impact. She replied: “I buy organic produce as much as possible as Cesar was one of the earliest to champion that. And I purchase 80 to 90% of my clothes at resale shops.

“I have a hard time spending $50 on anything, even though I can. I never realized how privileged I was growing up. It’s almost like survivor guilt.”

Susan,
Still have photo you took at Soquel Meadows many years ago. Was there a year ago last May. Sadly neglected . It was so beautiful.