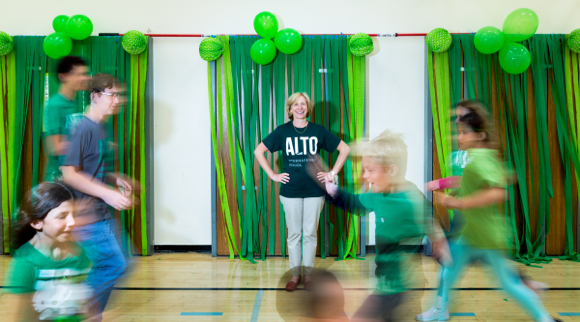 We arrived on the Menlo Park campus of what was known until last week as the German-American International School on a festive day. The student body was celebrating the school’s new name, Alto International School, to reflect its growing multilingual program serving preschool through grade 12.

Alto will be the only school offering the entire continuum of the International Baccalaureate (IB) curriculum in Silicon Valley. “Adding the high school [this year] to our offering is a logical extension of our current program and enables us to offer our dynamic, inquiry-based programs to a broader array of students,” said Sally Thorogood, who’s been Head of School at Alto since April. She first served there as the Elementary School Principal.

The school offers German, French, and Spanish as language options, and will continue its German immersion program for preschool and elementary school students, offering students the choice to continue their German language studies in middle and high school. “Our German roots are important to us and German language classes will always be part of our growing academic offering,” said Sally (pictured top in Alto t-shirt). 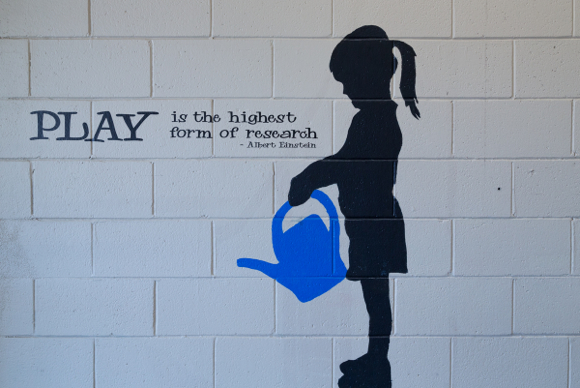 Born in England, Sally became immersed in the international community while living and teaching in Munich, where she and her husband lived while he worked for BMW.

“I became a strong advocate for IB education both as a mother and an educator,” she said. “With our children grown, my husband and I decided we needed to look for a different opportunity and that led us to Silicon Valley.”

Having lived among an international community that included Americans, Sally thought she had a good idea of what life would be like here. “We thought the transition would be a bit easier than it’s been,” she said, citing little bumps like a European credit history not translating over to the states.

“Another is, I think, somewhat unique to Silicon Valley,” she said. “There is this drive for students to really progress academically. As an educator, I want to bring balance to a child’s education, to remember the social and emotional development as well.”

Alto’s student body is made up of 40 different nationalities. “A large percentage are Americans with German as their other language,” she explained. “And 20% of our families are neither German nor American.

“But it’s the German connection that brought us here and it’s still the connection. We thoroughly enjoyed our time in Munich.”