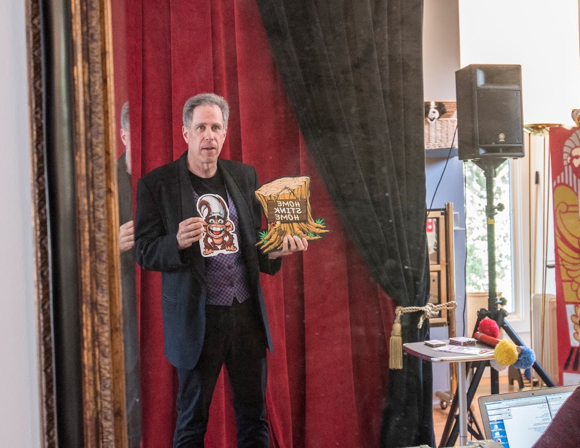 When Marshall Magoon was in high school at Menlo-Atherton, he and some friends performed a magic show at Hillview. “We did the water tank escape and ended up damaging the stage, warping it,” he recalled. “We had to do another show the next year — for free.”

Magic has been front and center in Marshall’s life ever since his father gave him a magic kit when he was 16. He met David Copperfield somewhat randomly while working in Hawaii shortly after graduation and later Channing Pollack. “He’d retired and was living in Moss Beach,” Marshall said. “He performed with birds. I learned card manipulation from him.” 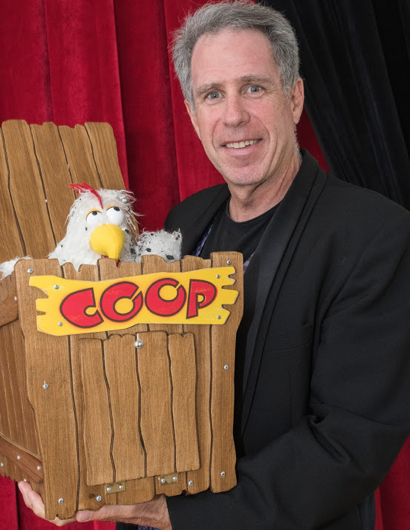 Magicians, it seems, learn from other magicians. Marshall is a member of the Oakland Magic Circle as well as the International Brotherhood of Magicians. He worked at the Magic Cellar, which was in the basement of Earthquake Magoon’s in San Francisco. “That club came about because the great magician Carter the Great’s collection was stored there,” he said.

Marshall also does magic consulting, most recently for Shrek the Musical as well as the San Francisco Ballet and ACT. He explained that some magicians are just creators. They don’t perform but rather create tricks and illusions. “Of course, there’s a difference between creating and making it work on stage.”

To that point, Marshall practices in front of a mirror a couple of hours every day in a special magic room that’s part of his Menlo Park home. “I try to avoid putting in a new piece because I obsess on making it perfect,” he said. “It takes a good month for me to practice a new trick before putting it in a show.”

Marshall said he’s actually shy but “that changes when I go on stage,” whether at a birthday party or large corporate function. “It’s great to get an audience involved. And, of course, in a magician’s mind, if you borrow some guy’s $20 bill at the beginning of a show, people are going to stay around to see if the guy will get it back!”

You can get a sample of Marshall’s magic on YouTube and learn more about his performance options on his website.

Oh, and yes, his real name is, indeed, Marshall Magoon; quite fitting, we think, for a magician.