When Michael Closson retired as Executive Director of Acterra three years ago, he vowed to stay true to his environmental activism — but play more. He reports that he’s stayed pretty true to his word.

“I became an environmental advocate because of my love of the natural world,” he says. “So that means spending a lot of time in nature.”

He hikes/walks six days a week and does Sierra backpacking trips. “Sometimes we stay local,” the Menlo Park resident says. “We’ve found Menlo College is a great place to walk the dog. It’s a beautiful campus.

“Arastradero Preserve is another favorite, along with Joseph Brandt Park, Sunol Regional Wilderness and Fort Funston. They are all dog friendly.” 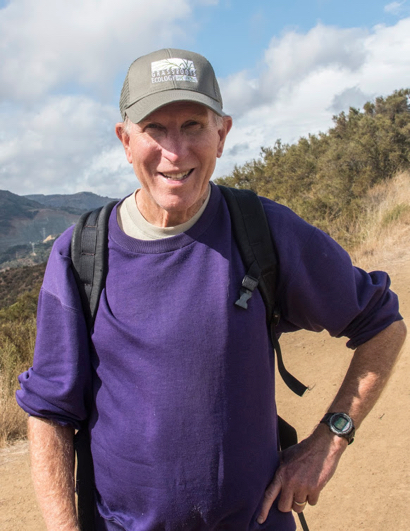 What he’s found best about retirement is the flexibility it allows. When he’s not enjoying the outdoors, he can pick projects that he wants to work on.

He’s been involved with the Center for Climate Protection. “For the past two years, I’ve been their Silicon Valley consultant,” he says. The Sonoma-based organization works  with business, government, youth and the broader community to advance practical, science-based solutions for significant greenhouse gas emission reductions.

His most recent project has been to help start Peninsula Clean Energy, which officially launched on October 6. “Supervisors Dave Pine and Carole Groom were champions of this effort and serve as board members,” he says. “All 20 cities in the county are members, and every City Council voted unanimously to join. There are economic as well as environmental  benefits. I’m on the Citizens Advisory Committee, serving as both champion and watchdog.”

Peninsula Clean Energy gives all PG&E electric customers (residential, commercial, and municipal) in San Mateo County the choice of having 50% to 100% of their electricity supplied from clean, renewable sources like solar and wind at lower rates than PG&E. County residents will be automatically enrolled into PCE through a series of phased enrollments, occurring over the course of 12 months.

“The thing that excited me about this is that it’s renewable energy at lower costs,” said Michael. “And it’s controlled by local officials. At the Board of Directors meetings I’ve attended, they are responsive to local concerns and interests.”

Michael’s business card reads “Local Climate Solutions” and he explains why that is:

“All three words are important. Climate change is a huge challenge for humanity, and we have to address it in a variety of ways. There can be gridlock in Washington, but there are a lot of things that local, county and state governments can do. Their actions can be a catalyst for change, for seeking solutions.”