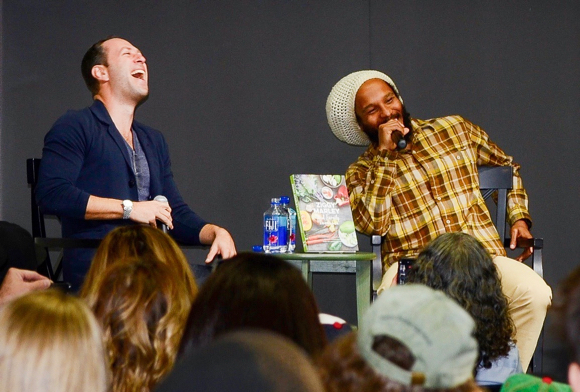 In conjunction with the release of his latest book, Jamaican musician Ziggy Marley spoke at Kepler’s last Wednesday to discuss his love of family, food, and music.

His new cookbook, Ziggy Marley and Family Cookbook, includes recipes for Jamaican and Ital food inspired by his childhood. “The cookbook is not just about me,” he explains, as his wife, mom, and other family members contributed many of the recipes. [Note: Ital, also spelled I-tal,  is food often celebrated by those in the Rastafari movement. The word derives from the English word “vital”with the initial “v” removed.] 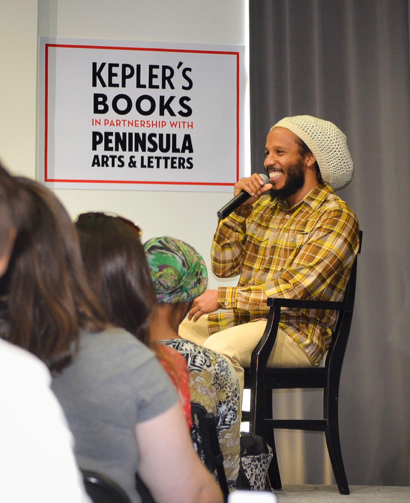 For Marley, cooking is spontaneous, creative, and improvisational. While cooking, he doesn’t follow a recipe, and even many of the recipes in his cookbook came from his memory.

“When we’re cooking, music is playing,” he says. “I don’t want to do it myself. It’s about community more than about me.”

Marley explains that Jamaican and Ital food feature “lots of natural stuff,” and he wants to ensure that the food in his book has those same characteristics. After all, “food is your first medicine,” he says. “Eat good, feel good. [You’re] supposed to feel the energy of the food.”

In addition to his new cookbook, Marley has just released a new self-titled album, has acted on Hawaii Five-0, and has published two other books — a children’s book and a comic book. For his work, he has garnered seven Grammys and one Emmy. But regardless of how well known he and his dad, Bob Marley, are, he believes, “the name does not make the people; the people make the name.”

He also emphasizes that in a time of so much negativity, it is crucial to care for each other, spread love, and help more than just yourself. “We might not realize this, but the people who love are more than the people who hate,” he says.

After the talk, Marley signed copies of his cookbook before getting back on his bus to continue touring for his new album.