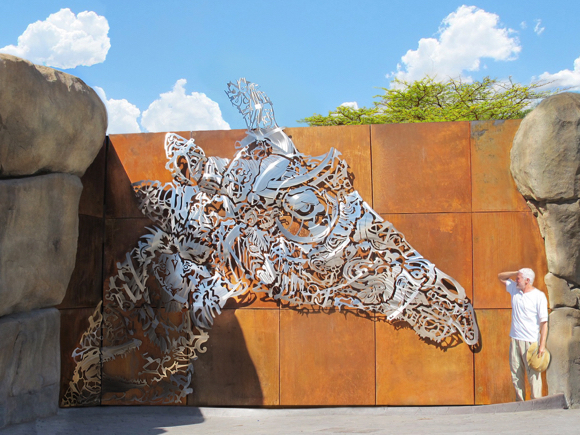 When photographer Irene Searles and I visited sculptor Roger Stoller at his home in Ladera last February, he was working on a sculpted giraffe for the El Paso Zoo.

Roger let us know that after two years in development, the giraffe is now installed in the African Exhibit and renamed Lmara, the colloquial name for giraffe used by the Samburu tribe in northern Kenya.

The sculpture depicts iconic animals of Africa, hidden within the metal-lace pattern in the shape of a huge giraffe head. Like many of his works, this “seek and find” aspect adds a fun interactive element to be enjoyed by visitors of all ages. To suit the diversity of the audience, some animals are easy to find, while others present more of a challenge.

The corten steel wall and faux artisan rocks were designed by Roger to create an ideal backdrop for the bright, highly-finished stainless sculpture, while also tying into the existing environment, according to  a statement on the CODA: Collaboration of Design + Art.

At the ribbon cutting, the zoo released this artist’s statement from Roger: “The nobility and magnificence of these creatures are the inspiration for this piece. Some veiled, others substantial in presence. The effect is intended to leave open spaces, to be completed in the mind of the viewer. Principles that underlie natural phenomena combine with serendipity and intuition, allowing me to maintain a balance between control and spontaneity in my work. The marvels of creation fill me with reverence and wonder; these are the energies that inspire me to create.”