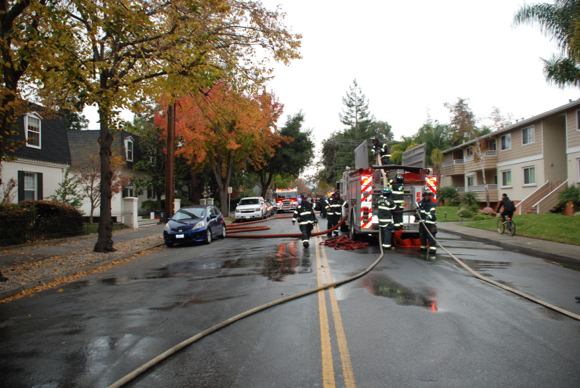 Menlo Park Firefighters responded to a large, two-story, 16-unit apartment complex fire at 3.02 pm Wednesday (Dec. 7), when the owner/occupant called Public Safety Communications to report that her kitchen fire was on fire.

Battalion Chief Dan Coyle arrived at 3:05 pm and reported “smoke showing” directing in-coming units to fire attack, rescue, water supply, ventilation, backup and standby, in case of the need for firefighter rescue. In all, 18 fire personnel from the Fire District and Redwood City responded on four fire engines, one ladder truck and two Battalion Command vehicles to the incident as part of a first alarm assignment. 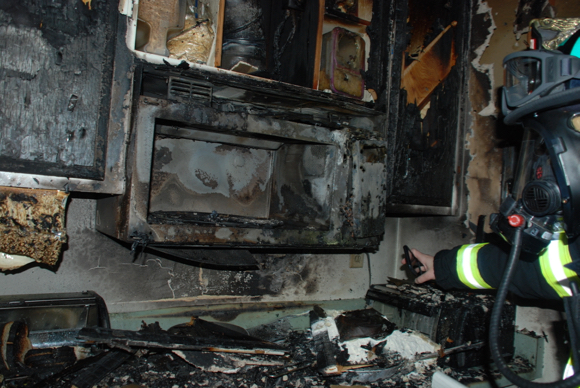 When Captain Ehren MacDonald on Menlo Engine 6 arrived at 3:07 pm, he directed his firefighters to stretch an attack hose line from the Fire Engine parked on Oak Grove Avenue, into the complex entrance and across an open center court yard to reach the 1200-square-foot, first-floor apartment unit, where dark smoke was pouring from the doorway, and they could see the orange glow of fire still deep inside the unit.

Using their self-contained breathing apparatus, the firefighters dropped in below the super-heated smoke layer crawling on their hands and knees while pulling the heavy hose line towards the glow and using their handheld thermal imaging camera to scan the smoke above them for temperature while looking around the unit through the smoke.

They quickly located the fire in the kitchen area and opened the hoses nozzle where the pressurized water quickly extinguished the fire as they swept it back and forth across the kitchen counters and ceiling. The fire was brought under control by 3:12 pm.

The owner/occupant stated she had been cooking bacon on the kitchen stove top when she became distracted by a phone call. She was examined by fire/paramedics for smoke inhalation and possible burns but was cleared for release and was not transported to a medical facility.

Fire Marshal Jon Johnston validated the cause and origin of the fire, deeming it as “accidental – human error” and estimated structural damage at $50k and property loss and damage to contents by fire, smoke and water at $30k, for a combined loss of $80k.

The unit was yellow tagged by the City and the owner/occupant and her roommate were both displaced by the fire. Fire Chief Harold Schapelhouman said “unattended cooking fires are the most common type of fire we see. It’s easy to get distracted by a phone call, ball game, someone at the door, bathroom break or some other event. We recommend you turn off the burner and move the pan or dish to another location while you are out of the kitchen”.

Fortunately, no one was injured and the fire and smoke were contained to the unit so other complex occupants can stay in their homes this evening.