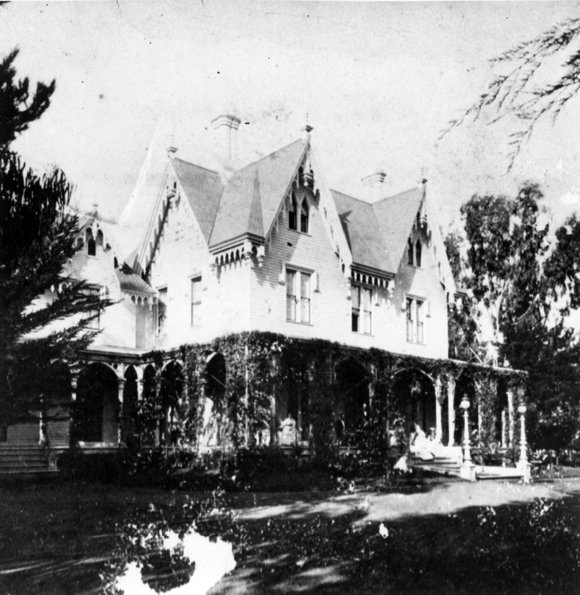 Carmen’s talk explored the Mid-Peninsula lifestyle during the late 1800s and early 1900s, focusing on a dozen or so wealthy individuals who chose the open acres and slow development of San Mateo County in order to get away from San Francisco, crowded and rife with vigilantism.

In the early 1850s, only about 500 people lived in the area. A stagecoach ride was advertised at the time to take between six to nine hours from SF to San Jose. Before the San Francisco & San Jose Railroad was completed in 1864, road travel on the Peninsula was often weather dependent. Hence, the mansions were mostly used as summer homes before the railroad, but after as well. 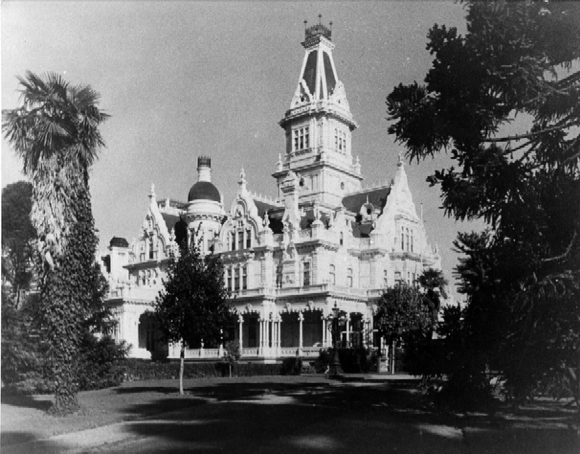 Closer to Menlo Park were the estates of Valparaiso Park, owned by Faxon Atherton, and Almendral (pictured top), owned by Thomas Selby. Selby, a mayor of San Francisco, would serve 17-course dinners at Almendral, located on the County Road that is now El Camino Real. Dinner would last from 6:00 pm to midnight.

James Flood had found his fortune by listening to investment advice from his patrons. Filthy rich from silver, he had Linden Towers (pictured above) built in 1880 for a million dollars. His 600 acres were managed by 120 gardeners. Gertrude Atherton, who married Faxon’s son, George, stated that locals regarded Linden Towers, built by saloonkeeper James Flood, as an “impertinent invasion.” To maintain status, the surrounding well-to-do husbands forced their wives to call on the former saloonkeeper and his wife. 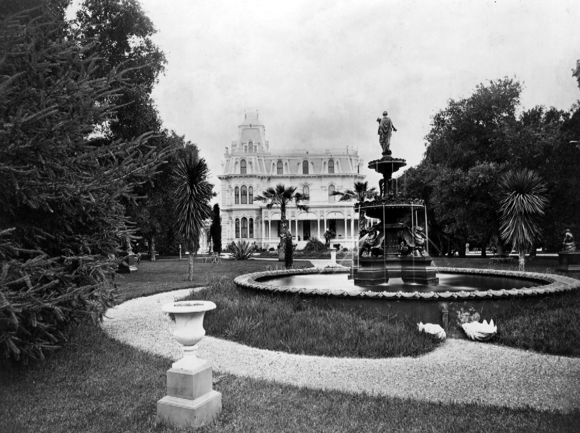 Within the town of Menlo Park proper was Thurlow Lodge (pictured above), the former estate of Milton Latham. Latham was serving only a few days as California’s governor in 1860 when he opted to gain the available office of U. S. Senator, replacing David Broderick, recently killed in a duel. Eager to move in, Latham had oil stoves lit to dry recently applied paint on the original house, built a few years earlier. The structure burnt but was quickly rebuilt and renamed as Thurlow Lodge. Latham maintained 32 carriages, each with its own team of horses.

Timothy Hopkins acquired the Latham estate, renaming the remodeled mansion Sherwood Hall. As with Linden Towers, eventually the elaborate and elegant furnishings, many of which had been acquired from Europe, were sold at auction. Some furniture and draperies went to Hollywood movie studios and others into the homes of current local residents. The mansions themselves are gone.

The ornate entrance to Lindenwood at Linden Ave. and Middlefield Rd. remains. So does the Gate House on Ravenswood Ave. and Laurel St., once at the long driveway to the Thurlow/Sherwood mansion.

Hopkins’ estate was bounded between the railroad tracks and Middlefield Ave., and between Ravenswood Ave. and San Francisquito Creek. His mansion was damaged by the 1906 earthquake and never occupied again, causing him to move into the Gate House, built in 1864.

Though Carmen pointed out that a handful of other estate homes survive, the Gate House, located adjacent to the Library, is Menlo Park’s most visible vestige from the age of the Mid-Peninsula’s 19th Century aristocracy.

Loved the historical information. The times of the mid 1800’s and the developing of the Atherton/Menlo area must have been a special time for sure!

Don’t see any mention of the Sharon estate,long before”THE HEIGHTS,those were great days and NIGHTS,!

Hey there Rod. You are correct about the Sharon Estate, plus many others along Atherton Ave. How have you been? Hope well…you must be off to Mexico? Best to you and your family.

Craig, you are correct,right now in Zihuatanejo,for the next 3-4months then back north.To the great states of California,Oregon,Washington,and Idaho to stock up on potatoes will be out by then. All is great here, our son Paul and his Lady Kira are in the middle of their 2 week visit,all going to Posole this afternoon there will be 8 of us,always a great time! Merry Cristmas to you and your family,Rod&Kerry.

Craig That was supposed to be Christmas….slow fingers.

Rod, sounds like a good time for all in Mexico. I too love the potatoes from this area. We have had about 12 inches of snow in the past weeks…..don’t mind it I have a great blower. We may go to AZ in the next few months to visit April’s family. So, don’t eat too much shrimp, and sometime maybe you could e-mail me rather than communicating through this venue? Do you have my e-mail?
Craig and April