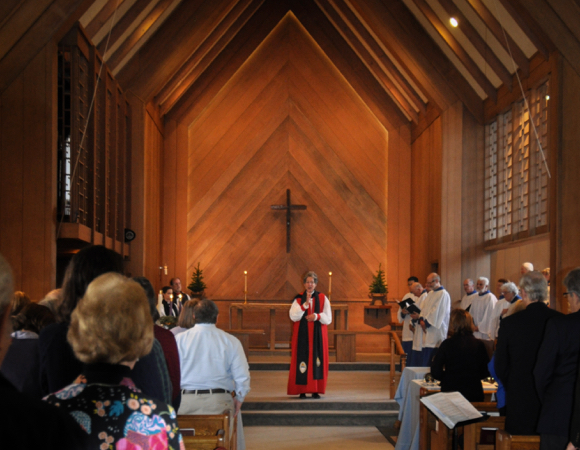 Katharine Jefferts Schori has worn two very different hats in her professional life, one as oceanographer and the other as cleric.

She brought those experiences to the fore at Trinity Church in Menlo Park last Sunday, first giving an Advent reflection, and then discussing science and faith at a community forum after the service.

Her curiosity about the “creatures of the sea” led her first to be an oceanographer. It was while studying biology at Stanford that she started wrestling with the intersection of science and faith, particularly after taking a philosophy of science class. “I read some of the great physicists of the 20th century — Heisenberg, Bohr and Einstein,” she said. “It opened up the mysteries of it all to me.”

She went on to get a Masters in oceanography and then a PhD in marine biology at Oregon State, gaining an expertise in squids and octopuses. She worked for the National Maine Fisheries Service.

She was an active lay person in church before she was called to ordained ministry, first on the  suggestion of a number her fellow parishioners and some years later by a priest in another congregation. She was ordained a priest in 1994 and was consecrated the 9th Bishop of Nevada in 2001.

“I think it had probably something to do with my own journey, wrestling with those questions of science and religion, and inviting other people in the community to wrestle with questions,” she told an NPR interviewer soon after she was elected Presiding Bishop in 2006, the first woman to hold that position. (Note: In the Episcopal Church, the Presiding Bishop is the chief pastor and primate of the national church and its nine ecclesiastical provinces.)

The Bishop told her Menlo Park audience that she’s increasingly convinced that the world’s great religions and science share a lot. She explained (in excerpted quotes that follow): “They are both communities of wisdom. They both exhibit behavioral norms.

“There are some parallel practices and habits of discipline. In both realms, there is a search for truth, beauty and elegance.

“Knowledge in both fields advances through questioning. Both are fundamentally communal activities.

“In both, change and growth come in small adjustments. Both have to live with a new idea for awhile. And both exhibit normal human anxiety when we’re in the middle of change.

“Does it matter for the two traditions to come together?  One discipline tells us how the heaven goes and other tells us how to go to heaven!”

You can watch/listen to Bishop Katharine’s remarks about science and faith via links on the Trinity Church website.