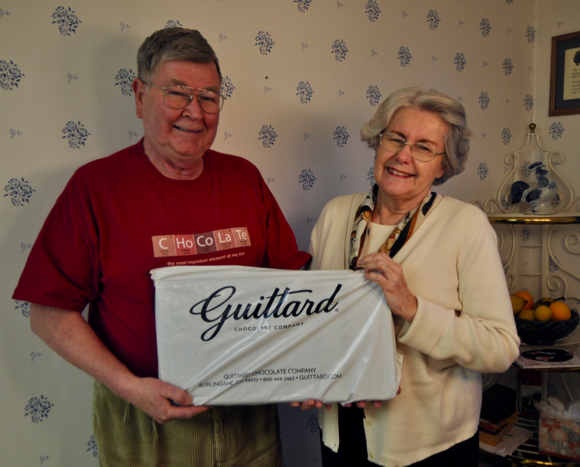 Menlo Park residents Sally and Howard Peters were trained and worked as chemists, but now it’s as “Mr. and Mrs. Chocolate” that they’re best known. The reason: Since 2004, they’ve  toured the United States sharing their presentation, “Chocolate — Food of the Gods,” which explores the history and chemistry of one of America’s favorite treats.

Their next appearance is local, at the town of Woodside’s First Friday event on Jan. 6th, which begins at 6:45 pm with complimentary refreshments. The talk is free of charge and will take place at the Woodside Town Hall, 2955 Woodside Road. At the end of the presentation — “the bitter end” said Howard with a chuckle — the Peters will be raffling off a 10-pound bar of Guittard chocolate (pictured in photo).

The obvious first question — why chocolate? “People take a lot of things for granted, and one of them is what’s involved in making a chocolate bar,” said Howard.

Added Sally: “Like everything, chocolate is made of chemicals, more than 300.”

Last year, the American Chemical Society  (ACS) honored the Peters with its public outreach award because of their use of chocolate to explain the wonders of chemistry to non-scientists.

Howard explained that almost all cocoa beans come from third world countries. After picking, “it’s fermented with temperatures up to 120 F. If you don’t have the fermentation step, there’s no chocolate.”

The beans are then ground, leading to a chocolate liquor which is pressed, creating  cocoa butter and cocoa powder. The complete process is detailed in an ACS online pamphlet.

We asked the Peters what their favorite candy is and were told they get asked that a lot. They did confess to a penchant for See’s White Divinity Puffs, a habit formed when Howard was getting his doctorate in chemistry at Stanford . “We could buy a piece for 15 cents then!” he exclaimed.

In a bit of irony, Sally is actually allergic to chocolate, at least in quantities, which she, of course, avoids.

As for Howard, he’s an encyclopedia of chocolate trivia, which he’ll be sharing with the Woodside audience. Here’s a teaser: “The Reese’s Pieces that are used to lure the alien in E.T. were supposed to be M&Ms, but [candy maker Mars] didn’t want the company associated with a space alien.”

That mistake was Hershey’s gain, according to Wikipedia, with candy sales increasing by as much as 300%.