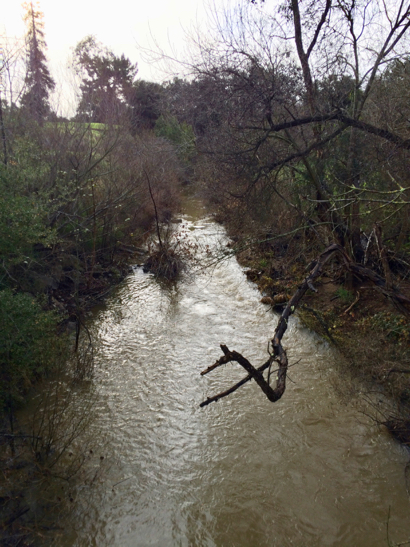 Sensing a break in the rain, which was confirmed by weather forecasters, we ventured out this morning to look what the predicted weekend rain had wrought so far.

Not much, according to InMenlo weather watcher Bill Russ as of 9:00 am: “.2″ in my gauge just moments ago. I am now at 11.45″ season-to-date and planning for more today.”

San Francisquito Creek (pictured) bore Bill’s measurement out. It was moving briskly but hardly raging. And venturing over to the Stanford campus, there was still no water in Lake Lagunita.

The bigger surprise, given the forecast, was that no more rain fell by 4:30 pm. (We don’t count a spritz here and there.)

Earlier in the day, Fire Chief Harold Schapelhouman issued a press release assuring residents that the Menlo Park Fire Protection District is preparing for days of rain, wind and flooding. Staffing and the number of response units will be increased based upon weather projections and local conditions. Backup generators, flood plans and preparations are all in place along with contingency plans to use civilian members involved with the Community Emergency Response Teams (CERT).

“We have a significant tree canopy in Atherton and Menlo Park, and with years of drought, I’m concerned about wind and water saturation, especially with so many large trees in close proximity to structures,” the Chief said. “After that, it’s power outages [and then] the creeks.

“We’re at the bottom of a large water collection basin in the hills that stretches from Palo Alto to Woodside. Our neighborhoods in East Palo Alto are perceived to be less vulnerable than they were in 2012 because of improvements to the levees, but they haven’t been tested and the levees are as high as the homes roof tops in some areas. The new Marsh Road channel in Atherton is a huge improvement, but it’s still an uncovered open waterway.”