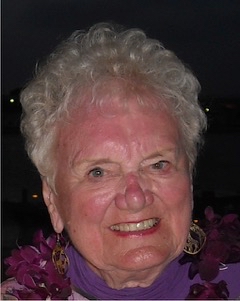 Vera Florcken Stern — beloved mother, grandmother, great-grandmother, philanthropist, and businesswoman — was reunited with her husband, Sidney Stern, at the age of 94 on January 16, 2017.

She was born May 5, 1922, in Palo Alto and raised in Modesto. She attended Modesto Junior College and UC Berkeley before enlisting in the WAVES (the women’s branch of the Navy) during WWII. She spent her service time stationed in her favorite city, San Francisco.

She married Sidney, her college sweetheart, in 1945. During their 46 years together, they built Fireside Thrift in California, Nevada First Thrift and Nevada First Bank in Reno, and traveled the world.

Vera will always be remembered for her generosity towards others and her years of volunteering. During her time in Atherton, she was active as a Girl Scout leader, and the welcome mat on Douglas Way was always out for her children’s friends.

She was involved in synagogues and their sisterhoods in Los Altos and Reno and was President of the Reno Chapter of Hadassah. Through the Stern Family Foundation, which she founded, she gave tirelessly to education and services for women and children. She published her memoirs last year which detailed her exciting and adventurous life with her husband.

Burial will be in Truckee at a later date.

While this is a sad day for the world, heaven is now an even better place and you are once again together with the love of your life. May G-d bless you, Vera, and your wonderful family.

Prayers go out to the Stern family at this most difficult time. May G-d bless you all.