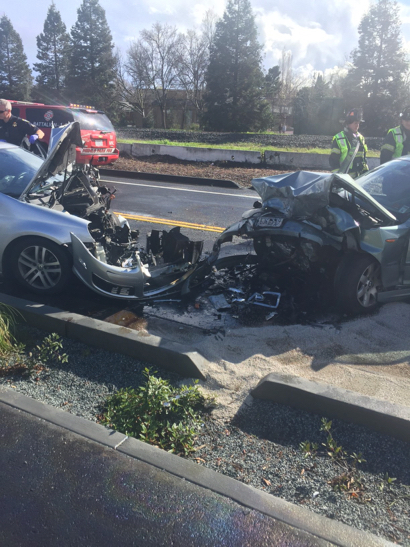 There was a head-on collision today shortly after 1:00 pm on Chilco Street near Fire Station 77 in Menlo Park. Both occupants of the automobiles survived the crash.

Captain Jeff Schreiber and the crew of Menlo Engine 77 arrived on-scene at 1.06 pm and found that a Volkswagen Sedan and BMW 325 Sedan had collided head-on on the stretch of Chilco Street that runs behind Facebook between Constitution Drive and Hamilton Avenue.

Both drivers, a male and a female, were out of their vehicles when the fire personnel arrived. While they appeared to be uninjured, they were medically checked by paramedics who recommended that they be evaluated by a physician. Both were transported by ambulance to Stanford Trauma Center for observation as a precaution.

Menlo Park Fire Captain Schreiber said: “We were a little surprised to see both occupants out of their vehicles given the destructive damage to each of the vehicles and the head-on collision…They both were very fortunate to apparently be uninjured, let alone alive.”