“The Orchid Whisperer” author, Bruce Rogers, will expand your orchid knowledge on Jan. 31 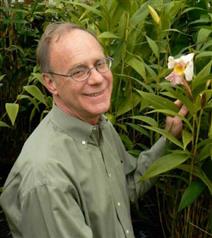 Whether you are considering growing orchids, are having trouble with the orchids you are already trying to grow, or think you could never possibly grow orchids, Bruce Rogers can give you some advice. The author of The Orchid Whisperer will share his expert tips from more than three decades of breeding and growing orchids at the Menlo Park Library on January 31st at 6:30 pm.

If you have an orchid you’d like Bruce to examine, bring it along; Bruce will give specific advice, as time allows.

Bruce has been growing, hybridizing, and decorating with orchids for over 30 years. He began his professional career in the late 1970s when the City of Atlanta Parks Department hired him to work with its orchids in the greenhouses in Piedmont Park.

Returning to San Francisco, he was hired by the Rod McLellen Company as the head grower for the boarding department and to hybridize Vandas. In the early 1980s he left to start Bruce Rogers Orchids, an orchid consulting and management company based in San Francisco. In 2002 Bruce joined Terry Root of The Orchid Zone and co-founded OzGardens, a business devoted exclusively to hybridizing and growing Sobralias.

This free event is made possible thanks to the Friends of the Menlo Park Library.