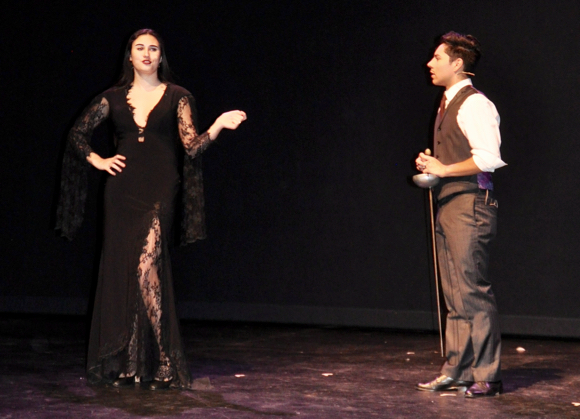 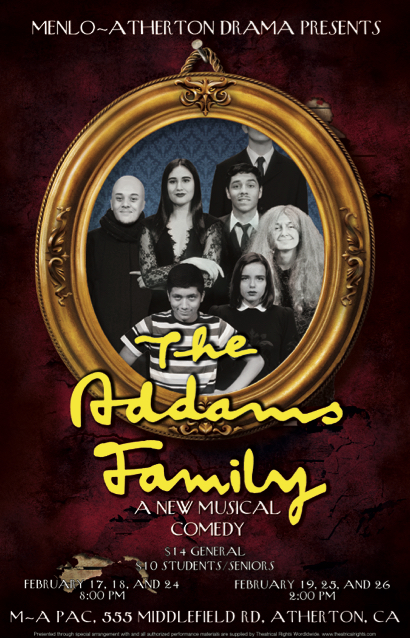 The production is overseen by the school’s newest drama teacher, Danette Bathauer, who arrived on campus last fall but has taught drama for over 20 years, most recently in the Clovis Unified School District.

“I suppose I chose The Addams Family for many of the same reasons I watched The Addams Family television show as a child,” she said. “While the show pokes fun at the quirks and eccentricities of the Addams Family, the real theme revolves around accepting others for who they are, no matter how different.”

The cast includes Daniel Mountfort as Lurch, George Stevenson as Fester, Emma Denend as Wednesday, Manuela Velasquez as Grandma, and Michael Pagee as Pugsley, in addition to the two leads.

“Morticia’s really fun because she’s got such a strong identity, with a very distinct presence and sense of humor. She’s such a classic, with an already developed character of her own, thanks to the fantastic work of actors like Anjelica Huston and Carolyn Jones.

“I’m super honored and excited to bring what I can to her character through my own performance. Exploring her character growth and interpersonal relationships has been a wonderful experience, only augmented by the fantastic people and performers with whom I’ve been lucky enough to work throughout this process.”

Last year Teddy Pagee played the Baker in the M-A adaptation of Into The Woods. “The best part about playing Gomez is his immense amount of energy and love for darkness, gloom, and his wife, Morticia,” he said. “He’s just a great and one of a kind character to portray.

“What’s challenging is getting the accent down. Gomez is of Spanish decent, and his character takes pride in that. I had to listen to Spanish speaking celebrities like Ricardo Montalban and Placido Domingo to familiarize myself with the way they emphasis their vowels and consonants.”