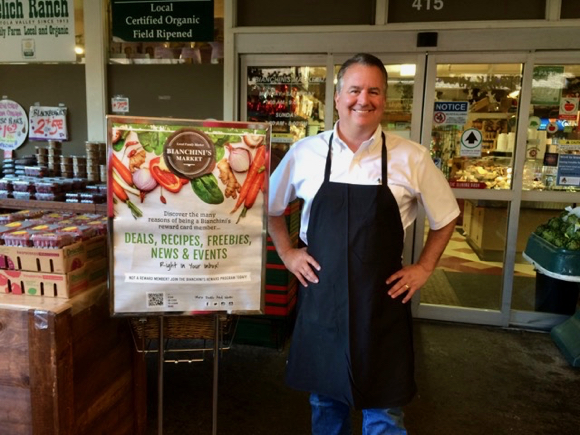 Kevin Bianchini is the amiable owner of Bianchini’s Markets in Ladera and San Carlos. He started Bianchini’s Market with his late father in Ladera in 1998, taking over the space occupied by Long’s Quality Foods since 1957. Father and son were already veteran grocers: Al was a long-time partner in the Foodville grocery store in San Carlos, where Kevin had worked since an early age. At the time, Kevin also had an established career as a firefighter with the Woodside Fire District.

Since opening, Bianchini’s Market has earned a solid place in the Ladera community, drawing additional customers from west Menlo Park and Portola Valley. It is an old-fashioned, family-run treasure, with a loyal staff who probably know your face, if not your name and favorite deli order. At the same time, it’s a forward-thinking and environmentally-conscious operation led by a true foodie.

Kevin Bianchini is a 21st century “green” grocer in every respect. He is an avid purveyor of fresh fruits and vegetables, organic and locally-sourced, with a keen social and environmental conscience. He devotes time and energy to developing mutually beneficial relationships with local growers and food providers. As a result, shoppers can purchase fresh-baked challah and focaccia from Woodside Bakery, authentic German pretzels and breads from Esther’s in Los Altos, and Ladera Granola from, yes, a Ladera family. 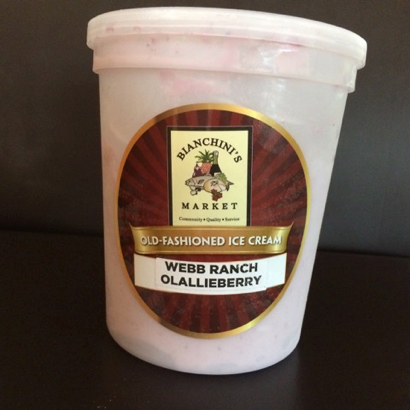 Kevin’s commitment to locally grown produce helps ensure the viability of  nearby farms. Thanks to Kevin, Webb Ranch has an outlet for its past-prime ollalieberries, enabling Bianchini’s to offer a unique flavor of housemade ice cream. Pomponio Farms on the San Mateo coast is the market’s “personal organic garden,” passing on its entire crop of seasonal vegetables to Bianchini’s shoppers. There are apples and pears from Jelich Ranch in Portola Valley, corn and berries from neighboring Webb Ranch, and other locally grown and produced items from Kevin’s regular Saturday morning visits to the Farmers’ Market in San Mateo.

There are also King Crab Legs from Alaska and white truffles from Italy. Those items aren’t exactly local but, Kevin is a food enthusiast and eager to share of his finds. “I’m passionate about food,” he says. “It’s not really work for me. It’s fun.”

Under Kevin’s leadership, Bianchini’s Market operates with an eye to reducing its carbon footprint. A few years ago they applied for and won a PG&E grant that allowed the market to install energy-efficient cases and LED lights throughout the store. An unexpected result of the upgrades was to increase the ambient temperature inside the store by seven degrees, creating a more pleasant shopping and working environment for everyone.

Lately, the market has shifted its promotional focus from print advertising to a Rewards program that directly benefit its customers. The program offers a 2% rebate to members twice a year on their total purchases. Members also receive e-mailed specials and weekly coupons for free items, plus a quart of Bianchini’s ice cream on their birthday. Sign-up forms are available at the registers, and details are at bianchinismarket.com.

In a family with more than 50 years in the grocery business — 18 of those in Ladera — Kevin reflects on the ups and downs. “Change is a requirement in our business. And this community has been so supportive. Thank you all!”

This article originally appeared in the Ladera Crier; used with permission