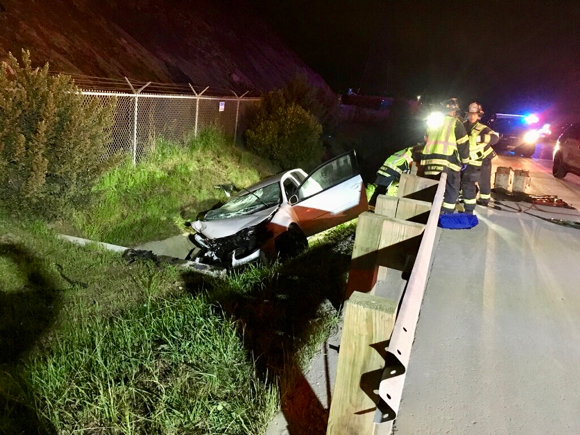 At approximately 3:14 am this morning (3/4), Menlo Park Police officers and Menlo Fire responded to a single vehicle fatal injury accident on Eastbound SR 84 (Bayfront Expressway) east of Chilco Street. The vehicle had left the roadway and hit a concrete culvert pipe abutment located in a drainage ditch.

Police and paramedics administered lifesaving efforts to no avail. The driver was pronounced dead at the scene. The identity of the driver is being withheld until family members are notified. The cause of the collision is still under investigation.

“Our condolences and sympathies go out to the victim’s family and friends of this tragic incident,” said Fire Chief Harold Schapelhouman. “We don’t know exactly why this occurred but this isn’t the first time we have responded to a significant vehicle accident involving this unprotected drainage ditch. We’ll be talking to Caltrans about that. Over the years we’ve advocated for various roadway safety improvements on this stretch of roadway.”

All eastbound lanes of SR 84 (Bayfront Expressway) were closed for approximately 4 1/2 hours while the collision was investigated. If anyone witnessed this collision, they are encouraged to contact Traffic Officer Brent Hughes at 650-330-6300.