Local church participates in Hands Around the Mosque 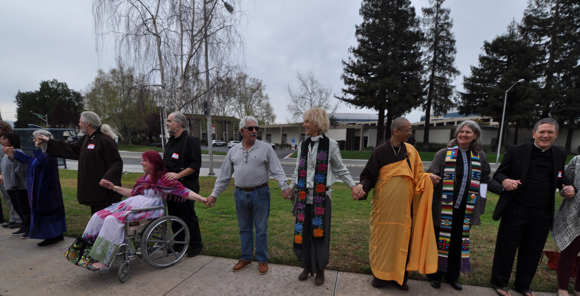 A group of parishioners from Trinity Church in Menlo Park (pictured below), led by the Rev. Matthew Dutton-Gillett, participated in the Hands Around the Mosque event yesterday at the Muslim Community Center in Santa Clara.

According to a MCC staff member, about 800 people of all faiths gathered to not only circle the building but to be in community together and listen a over a dozen speakers. This is the third year the event, which was co-sponsored by the American Muslim Voice Foundation, was held.

“Participating in something like this, bringing people together from many religious traditions and backgrounds, does at least two things,” said Matthew. “First, it helps all of us to remember that there is much more that we share in common than that divides us, and we need to be reminded of the power of simple human connection.

“Secondly, it reminds this community of Muslims that despite the anti-Muslim rhetoric that we are hearing so much, and despite the threats and acts of vandalism being made against mosques across the country, they are not alone. That we, their neighbors both physically and spiritually, care about them and want to support them.”

Isn’t this just make you feel wonderful? Let’s open our doors to people that hate us, want to behead us, all in the name of a pedophile named Allah!
What are you people thinking? Or I would suggest not thinking? Where were you when Islamic Terrorists where stoning women for no reason. Throwing known homosexuals off the roof tops? Do you really think that by submitting to them trying to show compassion, they will change their opinions?
Where were you when the Christians were being systematically being slaughter by these evil animals. How about the attacks on the Jewish Synagogue’s throughout this country, where were your hands then. You must have been sitting on them.