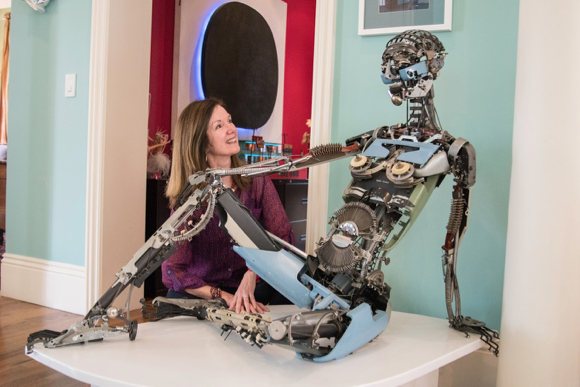 We were at Atherton resident Fannie Allen’s home to talk about her work as an interior designer. But we immediately got sidetracked by Delilah, a nude sculpture made entirely from typewriter parts by Bay Area artist Jeremy Mayer.

“He’s fascinated by anatomy” Fannie explained. “His studio is filled with anatomy photos and typewriter parts. He won’t take apart a valuable, working typewriter, just discarded ones. He’s featured in a documentary, California Typewriter, about one of the last typewriter repair shops in America.”

Art, we found out, has long been part of Fannie’s life and remains central to her work as an interior designer.

“I grew up in an art-infused house,” she says. “My mother had studied art history, and our dearest friends were art historians.

“But while I was in high school [in Richmond,VA], I flipped the other way and got into computers, science and math, and did programming. And I pursued a career in tech, even though I was an art history major at Stanford.”

A mother of three, she stopped working when her children were young and backed into being an interior designer. “Friends liked what I was doing in my house and would ask me to help them,” she said.

In her work, she’s long been curious why clients are slow to warm to the idea of buying art, which led her to write a blog on the topic. “It’s not about the money,” she said. “People can spend $5,000 on a chair but won’t spend half that to buy a canvas.

“People who haven’t bought art before feel they aren’t educated enough. Is that good art? Will I like it in two years? I try to help them over that stumbling block.”

For both her clients and her own purchases, Fannie patronizes emerging and local artists as much as possible. “For me to like a piece of art, it helps to understand what the artist is doing. When you buy locally, you get to know the artist. I love to go to their studio and see them work.”

Photo by Robb Most