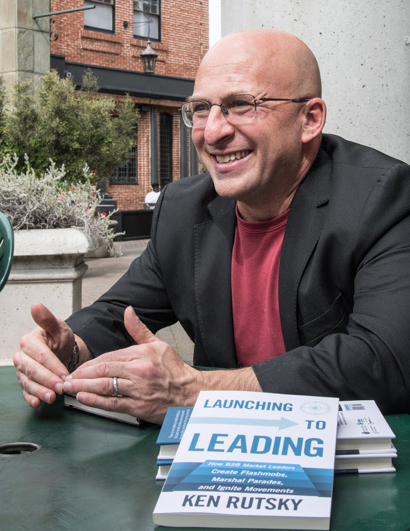 Menlo Park resident Ken Rutsky says he’s always wanted to write a book. He’s just surprised that his first book, Launching to Leading, is non-fiction rather than a novel.

“I’ve always enjoyed writing,” says the long-time corporate B2B marketeer who now has his own consulting practice. “There’s something satisfying about writing what you’ve been thinking about and sharing with others.

“This book has been on my mind for six years. One of my mentors labeled it ‘Mr. Rutsky’s Opus!'”

One reason he wrote the book is that he’d noticed people in marketing positions were struggling, given the flood of information now available to buyers. “The buyer is in control now, not the seller,” he comments.

“Feature-benefit marketing and solution-based selling worked well in a world with tightly controlled information, high barriers to entry and sales-led selling cycles. With today’s information commoditization and buyer-led purchases, if you cling to those ways, you’ll be forever in the weeds.”

Adding to that is the fact that people, especially in Silicon Valley, stay in any given job a relatively short time; he cites the average stay of 2 to 2 1/2 years. “When I started my career at IBM, people walked around with badges   showing how long they’d been there,” he says. “Mentoring was easier. Now executives don’t focus on career and professional development, given the short tenure of staff. People look elsewhere. Am hoping my book fills a need.”

In Launching to Leading, Ken, who is also a speaker and mentor, explains how to create a new kind of message, which he calls a Viewpoint. It articulates the brand’s story to the marketplace, creating a shared context for a market conversation that both resonates with and influences customers.

“Your Viewpoint is the well-planned and consistently articulated context that marries your value with the customer’s reality, taking them to a more successful result,” he explains. “The Viewpoint sets the stage for your value discussion with customers and prospects.”

When not consulting or writing, Ken says he’s busy “being a dad.” He’s long been involved with Menlo Park AYSO and has been a board member the past two years. He also manages the referee corps of 200 volunteers.

“It’s a labor of love,” he says. “I didn’t grow up with soccer but have come to love the game and all the great people you meet. Some of the volunteers have stayed involved long after their kids played. That’s incredible and rewarding!”