“The Glorious Violin” is theme of 2017 Music@Menlo concert series 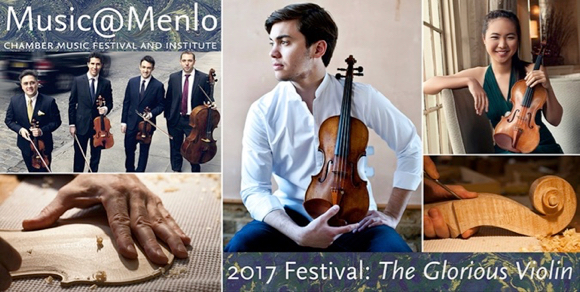 The violin has shaped the very evolution of music itself, demonstrated by the earliest violin compositions of the Baroque period, through the performances of extraordinary virtuoso luminaries of the Romantic era, and by the pioneers of instrumental expression of the twentieth century. The instrument ranks among a handful of tools whose design has remained largely unchanged for over three centuries, and no musical genre is more indebted to the modern violin family than chamber music.

Music@Menlo’s fifteenth-anniversary season celebrates composers, performers, and violin makers alike, illuminating the violin’s history and looking at the unfolding of classical music through the lens of this beautiful instrument.

Running from July 14 to August 5, the festival presents over 50 events on Music@Menlo’s three stages in Atherton and Menlo Park. Tickets go on sale April 18.