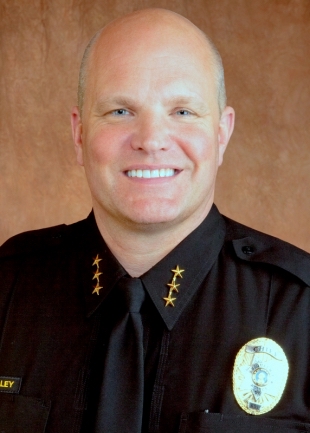 The Town of Atherton selected Steven D. McCulley as its new Chief of Police following a recruitment process that yielded over 30 applicants and included interviews with four separate community panels and one peer panel plus a second day interview with the City Manager, the Mayor and the Vice Mayor.

Chief McCulley was born in Spokane, Washington, and was raised in the Seattle area. He is a graduate of Washington State University with Bachelor of Arts degrees in Criminal Justice and Sociology. He is also a graduate of the Northwestern University School of Executive Police Staff and Command, the University of Arkansas Rural Executive Management Institute, and the University of Northern Florida Institute of Police Technology and Management School of Administrative Investigations. Chief McCulley has been a well-respected leader and law enforcement professional and executive in Washington State for the past 33 years.

For the last 6 years Chief McCulley served as the Chief of Police for the City of Snoqualmie, Washington. Concurrently, he also served as the contract law enforcement services Chief of Police for the neighboring City of North Bend, his hometown of the last 25 years. During these six years Chief McCulley worked diligently and improved transparency, accountability, and risk management within the police department and with both communities, ensuring community policing was at the forefront of all police operations.

Chief McCulley and his wife Lynn have been married for 27 years. They have two daughters, Megan and Peyton, who are both graduating from universities in Washington this summer. The Chief and his wife are excited to move to the Bay Area and become part of the Atherton community.

“I was strongly drawn to the Town of Atherton because of the professionalism of the Town management team and the police department’s true dedication to a very strong community oriented policing philosophy,” he said. “The department is committed to providing the highest levels of customer service to the residents of Atherton, creating a safe and secure community. ”

Sorry to hear about your new Chief. You couldn’t halve done much worse. My families dealings with him was nothing short of astonishing. I will include a link on a public complaint at the city counsel meeting in North Bend. Click on the March 17th 2014 meeting. My son was falsely accused of a horrible crime. The investigation that took place should have ended with in 2 weeks. What ensued was shameful. I use to think that the issue was with the arresting officer but I came to realize the greater blame rested with Chief McCulley. If anybody wants my speech in it’s entirety, reply to this and I will somehow get you the written speech. The Mayor could have stopped me at the allotted time which was 3 minutes. He was so interested that he let me go for 15 minutes and when he did stop me he asked for the full speech. Chief McCulley was in attendance of this meeting. He had his nose glued to his cell phone would not even look at me. This issue and the Officer Hogan issue are the ones that I know about. It was an abrupt retirement announcement. All to abrupt. Tell people to never wave there rights when dealing with this guy. I would keep an eye on this one. Funny, my son wanted to be a police officer. Not now. I think he would have been a good officer. Thanks to this guy he has changed his career goal. http://wa-northbend.civicpl… This is upsetting.