Menlo Fire rescues man from basement under construction in Atherton 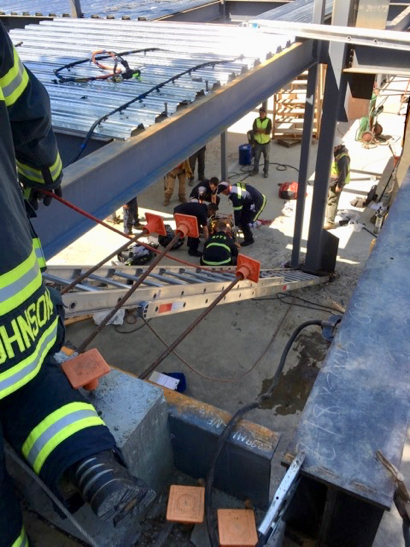 On April 21, 2017, Firefighters on Menlo Engine 3 were dispatched at 12:15 pm to a reported fall victim into a basement at a residential construction site located on Britton Avenue in the Town of Atherton. The victim was reported to be conscious and breathing, but had sustained a significant head wound and body trauma.

Captain Mike Harrington and his crew on Engine 3 arrived on-site at 12:20 pm and called Menlo Truck 1 and Engine 4 when he determined that there were no stairs going down into the basement. The victim, an iron worker, had sustained a 15 to 18 foot free fall into the basement.

The personnel on Engine 3 assisted by the AMR Ambulance crew treated and packaged the patient while members of Truck 1 and Engine 4 placed a fully extended 35 foot ladder at a convenient angle to establish a “ladder slide” that also incorporated a mechanical advantage rope and rigging system needed to manually and safely haul the patient up and out of the basement, after placing him in a stokes liter basket so his cervical spine and neck were immobilized so as to minimize the potential of further injury.

The patient was removed from the basement at 1240 pm, 20 minutes after Firefighters arrived on-scene, and transported by Ambulance to Stanford Hospital. Fire Chief Schapelhouman said: “We are experiencing a building boom as part of a robust economy. Unfortunately, we have also noticed that with that comes a higher and more frequent number of industrial emergencies.”

The previous basement rescue incident occurred in Menlo Park in August of 2016 and was followed in November 2016 by two workers trapped on a Sky lift 80 feet in the air that had frozen and required rescue.