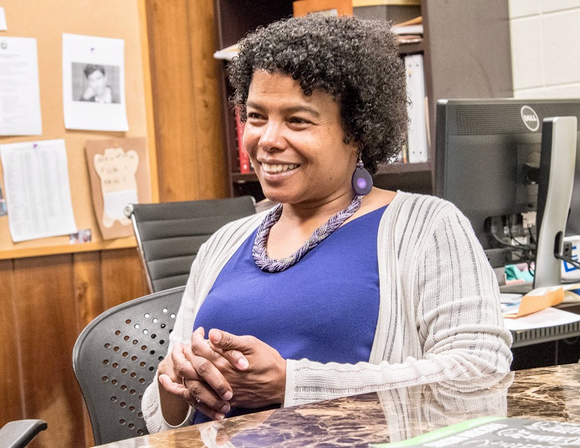 Dr. Terri Givens, Provost of Menlo College, is back where her undergraduate education began. She attended Stanford where she ran track for two years, studied international security and arms control under Condoleeza Rice, and graduated in 1987 with a degree in international relations.

“To be living back here is a dream for me,” said the Menlo Park resident, whose academic career took her to Washington and Texas, along with a stop in Southern California where she earned her doctorate in political science from UCLA.

On Wednesday, May 3, she’ll be at her hometown bookstore, Kepler’s, at noon participating in a talk, In Deep with Angie Coiro: Immigration — Real Politics, Real People.

Terri, who says she “views the world as a political scientist,” got interested in anti-immigration politics in the early 90s. Studying in France in the 80s, she observed the rise of Jean-Marie Le Pen and wondered at the time why few in the states were talking about the rise of the far right in Europe. That led to her first book Voting Radical Right in Western Europe which was followed by Immigration Policy and Security.

Currently, she’s teaching one class to Menlo undergrads and says if she could teach her students one thing, it’s how complicated immigration is. “People have a simplistic outlook,” she says. “But it’s so incredibly complicated.

“Plus people tend to focus on immigrants from Mexico. But more are coming from Central America and Asia than from Mexico.”

She’s working on another book about anti-discrimination policy at the national level in various European countries, tracking what she describes as “anti-globalism and scapegoating.” She admits to being “way behind.” Not surprising for a woman who can’t resist getting involved in numerous pursuits at once while balancing family responsibilities.

She’s on the board of the Boys and Girls Club of the Peninsula and has been working with the Peninsula College Fund and other college-bound organizations. “We’re looking at ways we can support more students going to college and enhance diversity in Silicon Valley, using Oakland Promise as a model,” she says.

Given that this writer and InMenlo contributing photographer Robb Most both grew up locally and both remember Menlo College when it was a two-year college with only male enrollment, Terri observed that “too many people still think that somehow.” We promised her that we’d mention that Menlo is a four-year, coed college whose mission is to focus on business editionwith a strong liberal arts emphasis.