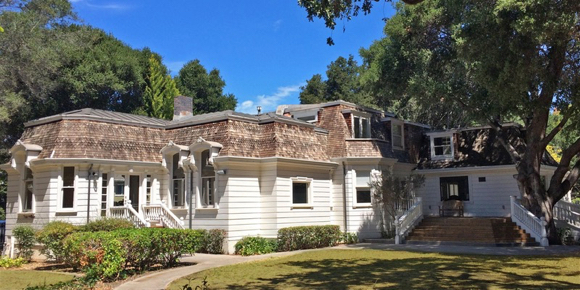 The Junior League of Palo Alto•Mid Peninsula (JLPA•MP) is opening up the historic Barron-Latham-Hopkins Gatehouse to the public for tours on Saturday, May 13. The Gatehouse is the oldest existing structure in Menlo Park and the last surviving gatehouse in the state of California.

The Gatehouse is one of only three buildings in Menlo Park to be listed on the National Register of Historic Places. The JLPA•MP has leased the building from the City of Menlo Park since the mid-1990s and it has rarely been seen by the public. It is important as a last remnant of the fabulous country estates that were built in the area during the 1860s.

A gatehouse is the building which stands at the entrance gate to a large estate. In this case, it was the 280-acre estate founded in 1864 by W. E. Barron, which included a 40 room mansion. Although this estate was purchased or inherited by different successful businessmen, the expenses of maintaining such a large estate thwarted their intentions to keep it intact.

By 1942, all the estate buildings had deteriorated and were removed, except for the gatehouse. It was preserved by Menlo Park’s city manager and the women of the Junior League.

Tours will run from 10:00 am to 3:00 pm and tickets are $9 per person. Proceeds from the tour benefit the Junior League of Palo Alto•Mid Peninsula. Tickets can be purchased online  or in person on the day of the event.