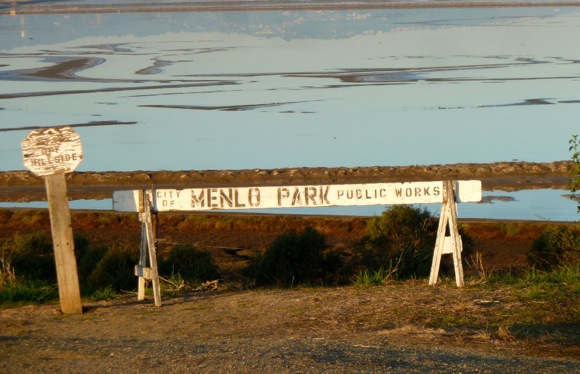 On June 1, President Trump announced the withdrawal of the United States from the Paris Agreement aimed at addressing climate change. The City of Menlo Park is vulnerable to the impacts of climate change, with the low-lying Bayfront area potentially facing future flooding and extreme weather and drought affecting all of our neighborhoods, according to city officials.

The City Council has taken actions to address climate change and make our community a stronger, more sustainable and better place to live. Menlo Park has led the way toward a low-carbon economy with its commitment to Peninsula Clean Energy’s ECO 100 renewable energy in all city facilities and groundbreaking renewable energy standards for new developments. Menlo Park already has one of the highest rates of new electric vehicle purchasing (at 14 percent of new vehicles) and will continue increasing its transition away from fossil fuel cars and trucks.

“As Mayor of the City of Menlo Park, I will work with other leaders around the country, and locally, through the Mayors National Climate Action Agenda to honor and uphold our commitments to the goals of the Paris Agreement,” Mayor Kirsten Keith stated.

Menlo Park will forge ahead together with over 175 U.S. cities representing over 51 million Americans, business leaders and partners who share our interest in protecting communities from devastating climate risks. Menlo Park is working toward a clean, carbon-free future of which we can all be proud.

“I’m excited by the Mayor’s leadership and will work with her and my colleagues on the Commission to recommend new actions to advance our city’s climate goals and commitment to environmental justice,” said Janelle London, Chair of the city’s Environmental Quality Commission.

Menlo Park’s first Climate Action Plan was approved in 2009 and the City Council stated at the time that it was intended to be a “living document” to be updated periodically as current strategies are implemented and as new technologies emerge to meet both the near-term and long-term challenges of climate change.

“I want to assure our residents and businesses that Menlo Park is on track to meet our climate goals by 2020,” said Mayor Keith. “No action taken by the Trump administration will change our resolve as we advance progress toward global targets for a stable climate. I am committed to collaborating with my City Council colleagues and the leaders of other cities to protect our shared future and develop any necessary enhancements to our adopted Climate Action Plan.”

No surprise here, the so called Mayor of MP is on the same blank page as Gov Moonbeam, the commie Mayor of NY City. What a three stooge trio they make!

Let us stop this insane policy of the United States President. Even china has understood the lesson! This president is not worthy of representing this great nation!

Thank you for your leadership, Mayor Keith and for helping ensure we keep the one planet we have intact.

Looks like Vittorio and Milessa have been sipping the grape kool aid! We do not want a world order, we do not like or care for the UN and their failed policies. In fact, we would like the UN to get out and move to Kenya where Barry Soltero can be king! Al Whore and his fake human global warming BS is nothing more than fake science for him to make money while he flies around in his private jet…..can’t you see a one world government will not work and does not work……maybe you should introduce Shira Law in MP!

However, Mayor Keith and her community are an example for us!. Revolutions start from the bottom!

Mayor Keith is a progressive with grandiose idea’s and if he think he is part of the “revolution” he had better think twice or three times! The progressive movement is on the lines of the communist movement which has not worked anywhere in the world…..look mat Cuba….and their screwed up country….Venezuela. If that is what you want for MP…then you need to reevaluate your thought process….back in the day when they had SRI protests, a Professor from Stanford by the name of H. Bruce Franklin a socialist/communist organized a group called the Vinseramos (probably mispelled), but that group was similar to the SDS, weather underground of Bill Ayers fame! They have gone away….and their failed attemp at taking over the government was a joke!