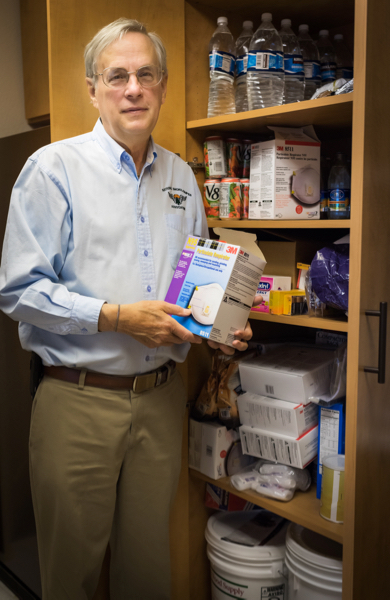 Given his commitment to public service, it’s hard to find something long time Atherton resident Peter Carpenter hasn’t been involved with. But sitting in a corner of his living room on a recent afternoon we came upon a topic that both Peter and his interviewer believe needs more attention — earthquake preparedness.

Last November this writer was in Kaikoura, New Zealand when a 7.8 magnitude earthquake struck, one that lasted two minutes and recorded the most violent ground shaking ever in that country. We soon discovered that not only was there no communication network, electricity or water, there was also no way out with roads completely blocked going north and south.

An earthquake with a lower magnitude could hit Menlo Park/Atherton and vicinity with similar consequences. “We’re lulled into a sense of false security,” says Peter, who is currently Vice President of the Menlo Park Fire Protection District board. “In the case of a major disaster, we will have no phone, fire or police service. People are going to have to take care of themselves, their families, their neighbors.”

Peter has been a member of the Atherton Disaster and Preparedness team for the past 10 years, a group that meets monthly. It’s been slow going, he says. “We’re finally making headway on designated emergency assembly places.”

It’s not surprising that the home Peter shares with his wife, Jane Shaw, is disaster ready. He has a ham radio (although we did wonder who’d he be talking with given that few others have one). There’s a big generator that runs on natural gas that also can be hooked up to propane tanks stored  on their property. Their gas line is configured in a way that if a tremor is sensed, it automatically shuts off. “Earthquakes don’t cause fires, natural gas does,” he reminds us.

Also at their disposal is a 55 gallon drum of water and 20 gallons of Clorox to make non-potable water drinkable. There are two portable toilets, dedicated to urination and defecation, so that the two aren’t mixed, which Peter says, “causes a mess.” Their house has been tied to the foundation with straps, and there is a large food pantry stocked with items like honey, dried eggs and peanut butter, located in what he’s determined is the building least likely to be severely damaged.

“It’s just so hard to get people’s attention about this topic, even though the USGS predicts there is 75%  chance of a large quake between now and 2025,” he says. “When you are isolated in your own home/neighborhood, the only resources you can count on are you.”

In addition to material on the Atherton Disaster and Preparedness website, other resources can be found on the USGS website, MPFPD Community Crisis Management website and in the book, Peace of Mind in Earthquake Country.