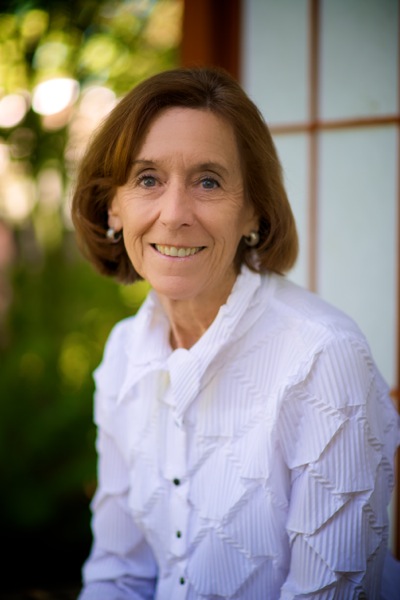 From a woman who has achieved success in both the lab and boardroom, it’s a little startling to hear her say with certainty: “I didn’t plan anything until I was about 32.”

Such were the words spoken by Dr. Jane E. Shaw during a visit in her Atherton backyard where we discussed how she came from the English village of Upton Warren to do ground breaking research and then lead a major bio-pharmaceutical company before serving on corporate boards like Intel and McKesson.

“Growing up in Worcestershire, I always imagined I’d stay in the countryside,” she says. “I hardly knew where America was.

“But as you reflect back, doors open. And, if you’re curious, you walk through.”

Failure opened Jane’s first door. She failed an exam that would have given her entrance to the University of  Nottingham. She spent a year working in a medical lab where she met someone who suggested she “aim a little higher.” As a result, she attended the University of Birmingham, eventually earning a PhD in physiology.

“I remember thinking ‘what am I going to do with this?’,” she says. “Coincidentally, the same professor who’d encouraged me earlier said he was putting together a team and taking them to America. I arrived in New York with a suitcase and $20 in my pocket. We were to become known as the ‘Brain Drain from England.'”

What was to be a two-year post doc turned into six, and then, as Jane tells it: “One day the phone ran. It was Alex Zaffaroni who explained that he was starting this new company out in Palo Alto and suggested I should come and take a look. The door just opened. It all just happened.”

The company was ALZA, which focused on drug delivery systems. Jane was able to continue doing research there, eventually shifting focus to the management side of the business, serving as President and COO from 1987 to 1994. “Growing up on a farm, you learn to manage various things,” she says. “In my professional career, first I managed a team, then a lab, and then people managing other people. At ALZA, you did a good job and were rewarded.”

After leaving ALZA, Jane consulted and then joined Aerogen, where she served as Chairman and CEO through 2005. Her affiliation with that company continues as U.S. chairperson of its Scientific Advisory Board. While visiting the Galway, Ireland based-company’s headquarters, she visited Menlo Park’s namesake Menlough Castle.

Of her work on public company boards, Jane says, “I’ve been very fortunate to go from a research career to a biopharmaceutical career to Board work, where my focus was getting more women into the C suite. I retired from my last corporate Board a year ago and have now turned to work with non-profits. I’m on the Board at Lucile Packard Children’s Hospital and the Oregon Shakespeare Festival and just became a trustee at Grace Cathedral [where the Dean is also named Jane Shaw].”

Given the range of her roles, Jane says her family is still the most satisfying aspect of her life. “That’s my legacy. In the business world, my time at ALZA was truly amazing, helping people do things they didn’t think they could do. The network of people I  worked with there continues to stay in touch.”

For those just starting a career, she offers this advice: “If you don’t know what you want to do, don’t try to make a plan. Just be curious. Watch to see if a door opens. And, don’t be afraid of failure.”

Here is another reference to Menlo Park’s namesake in Ireland. There is a small group of Menlo Park area residents who are trying to form some sort of sister city relationship between Menlo Park here and Galway (which includes the village of Menlough), Ireland. This effort is the response to the visit last fall by Gerry Hanley (see https://inmenlo.com/2013/03/29/group-meets-to-ponder-where-menlo-park-and-galway-city-should-become-sister-cities/ ). The group’s startup website is at https://sites.google.com/site/twomenlosisters/home . If you’re interested, support this effort by getting on the email list (click on Email List in left side column of website to find out how to join the list). Gerry Hanley is returning for another visit June 18-19.