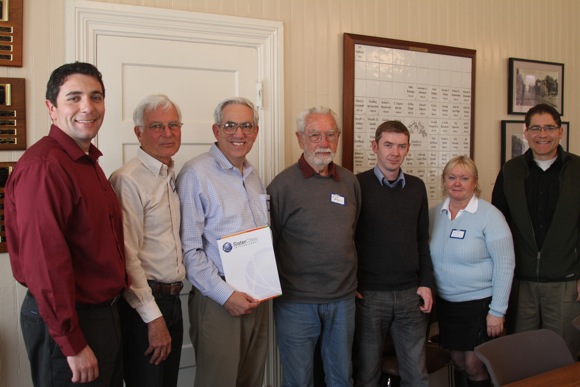 As has been told many times, the name “Menlo Park” derives from the name two Irishmen, Dennis J. Oliver and D. C. McGlynn, put on the gate to their property in 1854. This gate was on the west side of County Road (now El Camino Real) in Menlo Park about where Starbucks is now. These two, married to sisters, were originally from a small village on the west side of Ireland called Menlough (“small lake”). The village is now part of Galway City.

In his younger years, Gerry was part of the group that hosted the late Peg Gunn, former mayor of Menlo Park, when she visited Galway in 1988. Spearheaded by Jim Lewis and Jym Clendenin, both of the Menlo Park Historical Association (MPHA), and by Fran Dehn, President/CEO of the Menlo Park Chamber of Commerce, and encouraged by Menlo Park Mayor Peter Ohtaki and Councilpersons Kirstin Keith and Catherine Carlton, an initial meeting was held on Monday, March 25, 2013, to explore the possible parameters for a future ongoing relationship between the Cities of Menlo Park and Galway.

One option is to join Sister Cities International (SCI), an organization created at President Eisenhower’s 1956 White House conference on citizen diplomacy. Today over 600 American Cities are members. Another option is for the two cities simply to enter into some sort of informal agreement. There is already a cooperative effort underway as Gerry is working with a group of Galway citizens to have Menlo Park added to the sister cities Galway already has.

You can get more information about this sister-city project at the TwoMenloSisters website. If you would like to join this effort or just keep in touch with what is happening, you can add your email address to the MenloSisters email list – (please indicate your city of residence in the information box that will appear).

The TwoMenloSisters (an unofficial name for the sister-city project) website is at https://sites.google.com/site/twomenlosisters . To join the email list for the project, go to https://groups.google.com/forum/?hl=en&fromgroups#!forum/MenloSisters .

I think it’s a natural relationship, starting from the name of Menlo Park, but also because the two cities share a number of similarities, both being beautiful places on the west coast of their respective countries, and known for being education and business centers. I hope Menlo Park, CA and Galway City, Ireland do become sister cities.