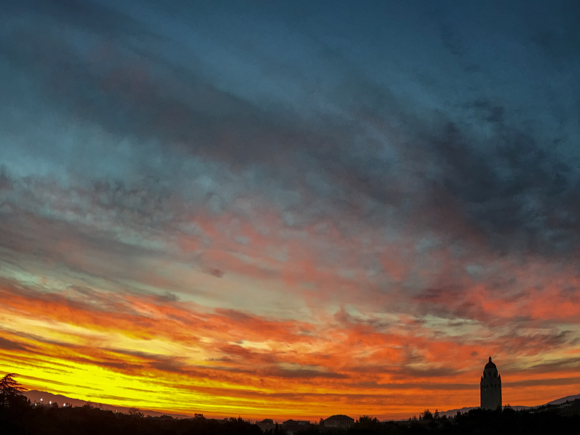 In Menlo Park — and the rest of the Northern Hemisphere — the Summer Solstice arrives this evening at 9:24 pm. Emails InMenlo weather watcher Bill Russ: “[This is] when the sun is the farthest from the equator. Days are not ‘longer,’ they simply have more daylight.”

The sun rose this morning at 5:47 am and will set 8:34 pm, amounting to 14  hours and 46 minutes of daylight. Continues Bill: “At that point the ‘solstice’ sets in which means the sun starts in the other direction. By December 21st we will experience less than 10 hours of daylight.”

This year’s Solstice comes amidst a heat wave that is sweeping northern California with record-breaking temperatures. Sunday was practically brutal with temps in the high 90s in the daytime and high 80s lasting well into the evening in Menlo Park. Last night was pleasant, perfect for an outdoor BBQ.

Meanwhile, the California Independent System Operator Corporation (ISO) has issued a statewide Flex Alert, a call for voluntary electricity conservation from 2:00 pm to 9:00 p. on Tuesday, June 20, and Wednesday, June 21.

Consumers are urged to conserve electricity especially during the late afternoon when air conditioners typically are at peak use. Consumers can help avoid power outages by turning off all unnecessary lights, using major appliances before 2:00 pm and after 9:00 pm, and setting air conditioners to 78 degrees or higher.

We salute the Solstice with a dawn shot taken by InMenlo contributing photographer Irene Searles one morning at boot camp on the Stanford campus.