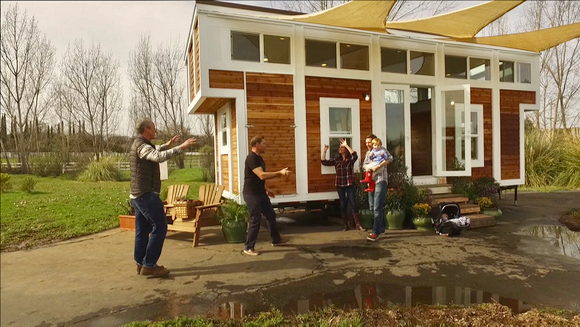 Fellow Menlo Park residents can spot familiar faces this weekend when CJ and Christina and children JJ and baby Max are featured on Tiny House Nation. The show airs on FYI (772 on Comcast Bay Area) Saturday, June 24 at 6:00 pm PDT. [Note: It is the show’s policy not to use participants’ last names.]

CJ is an attorney and Christina is a family physician. With demanding jobs and two young children, their goal was to escape Silicon Valley tech for what CJ labeled a “forced digital de-tox.” The first step was buying a 20-acre parcel of land in Amador County.

In talking with Tiny House Nation host John Weisbarth and renovation expert Zack Giffin, they asked for help creating a space that will help them reconnect with the stars and give Christina a spa-like space where she can relax. Explained John: “They wanted a place where they could regenerate on the weekends and spend time with the boys.” 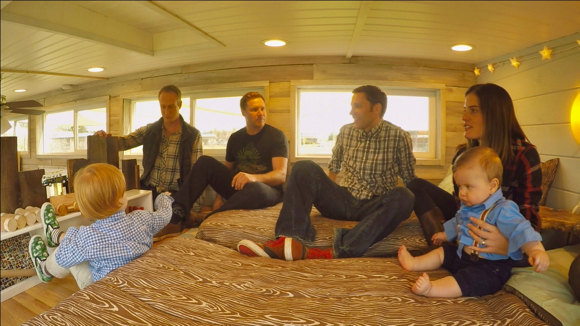 The result is a 344 square-foot, tech-free retreat with some innovative features that, in addition to the spa, include a large outdoor fold-out dining table for their extended family. The episode airing on Saturday not only chronicles the building of the tiny house but also its journey to Amador County, which had its perils during a wet and rainy season.

Tiny houses are defined as being structures no larger than 500 square feet. Tiny House Nation was the first of its kind in the tiny living genre and continues to rank as the network’s #1 rated program in the home space.

So cool to see my uncle on TV- I hope to visit you and your tiny house soon!

Have they been on another hgtv show