“Following My Muse: Exploring the Landscape in Watercolor” by artist Steve Curl is the featured exhibit at the Portola Art Gallery in July. There will be a reception for the artist on Saturday, July 1, from 1:00 to 4:00 pm. 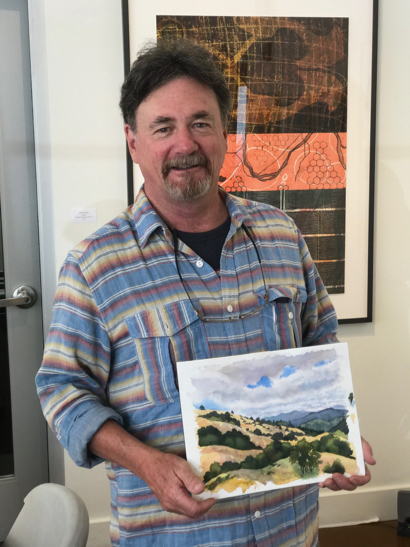 Locally known for several years as the editorial cartoonist for the Palo Alto Daily News, Steve is also a well-established watercolor artist and teacher. His paintings are inspired by his travels throughout California, Colorado, Yosemite National Park, and his local hikes at the coast and in the Santa Cruz Mountains.

For the past seven years, Steve’s paintings of Yosemite National Park have been accepted into the prestigious annual Yosemite Renaissance Exhibition, where they are on display all year in the Yosemite Visitor Center Museum & Art Gallery.

“I love the simplicity and freshness of watercolor,” said Steve. “It behaves in the same way that nature does, using the simplest of elements. It is easily portable and dries quickly, so it is the perfect medium to take on travels and extended hikes.

“Often times, the best paintings are produced quickly with a few simple, gestural brush strokes, rather than extended picking away in the studio. It is not particularly forgiving, however, so you have to think ahead, be decisive and try to nail it on the first passes of color.”

Having practiced the medium for more than 30 years, Steve also teaches watercolor painting at the Pacific Art League of Palo Alto, where he has had an enthusiastic following of students since 1991. When asked, “How long did it take you to do that painting?” he likes to tell his students, “Oh, about two hours and 20 years.”

The Portola Art Gallery is located in the Allied Art Guild (75 Arbor Road) in Menlo Park.

“San Gregorio Sunset” (24×30″, watercolor, May 2017) is one of the featured artworks in Steve Curl’s exhibit; photo of Steve holding one his paintings by Dennis Nugent (c) 2017

I wish Steve were in Seattle, so I can have a prevailage to take his class .