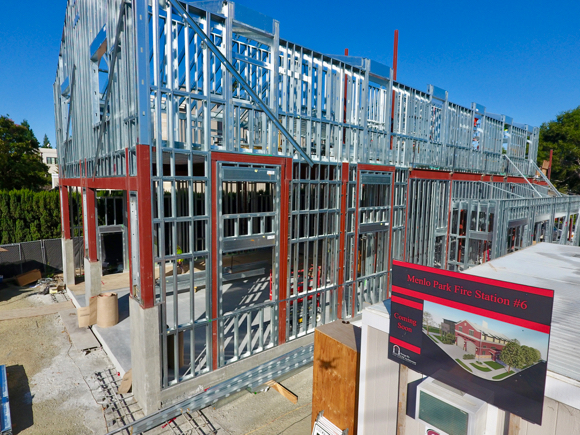 The structural steel and the metal framing is near completion, and the outline of the new 8,300 square foot, two-story new fire station #6 is now easily seen on Oak Grove Avenue in Menlo Park

The completely non-combustible structural steel and aluminum framing components were all made in the United States as specified by the Fire District’s buy American clause in their agreement with the contractor. The structure is also rated to a higher seismic resilience standard than other non-governmental buildings.

The fire station is scheduled for completion by February 2018. At that time, the single family residential home currently being used to temporarily accommodate the fire crew will be torn down. The Fire District’s original 1899 fire building will be moved from Fire Station 1, located at 300 Middlefield Road, to the site of the residence.

Meanwhile there was action just around the corner yesterday. Menlo Park firefighters were called to shut off the street valve for a fire hydrant that was sheared off by a vehicle at the corner of Hoover Street and Valparaiso Avenue.

The vehicles driver was not injured and it took firefighters on Menlo Engine 6 about 10 minutes to locate the street valve and turn the water off.

Captain Hunt on Engine 6 said the accumulating water was threatening to flood local first floor apartments in the area but it quickly drained once it was shut-off.