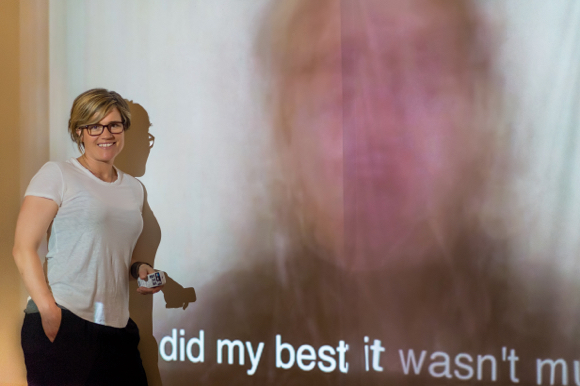 Most recently, multi-media artist Mel Day‘s work is focused on collective singing and civic engagement. This will be front and center when, together with Michael Namkung, the Wall of Song project, a first-of-its-kind collaborative singing video work, is presented at Grace Cathedral in San Francisco on July 25. Central to the project is a mass singing of Leonard Cohen’s Hallelujah.

“Cohen passed away on November 7 and the next day was the election,” Mel explains. “I’d recently reconnected with Michael, and we felt that the time was right to do something together.”

Mel and Michael launched the Wall of Song project on Inauguration Day in Washington DC and at the San Jose Institute of Contemporary Art. They started collecting voices in January and now have more than 200 voices from around the world.  Their goal is to promote inclusivity, engagement and community empowerment.

The program on July 25th will start at 7:30 pm, immediately following yoga, which is attended by 500 people, who will sing along with the video art installation projected on a 25′ by 15′ wall.

“The first time around, everyone will sing and then we’ll continue to show the video,” says Mel. “There will also be four singing stations in private nooks and crannies of the cathedral.”

Mel says she’s always been interested in mass singing. “As adults, we don’t sing in public much. There’s something about singing in large numbers that raises the hair on my arms. To me, it encourages a ‘we’ perspective. Your heartbeats even sync!”