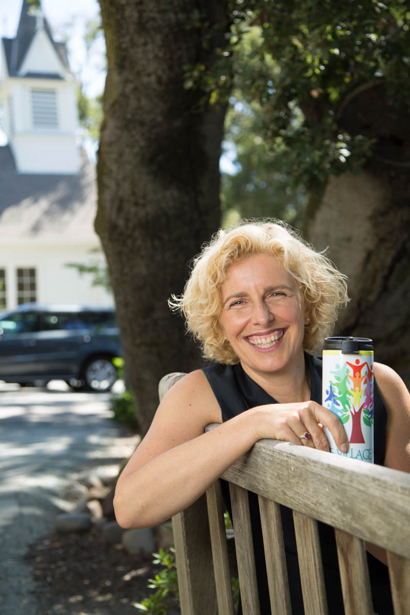 One of the things that the Rev. Ama Zenya heard when she first came to Woodside Village Church in 2015 was that people felt Woodside didn’t have a community gathering place.

“Parents at Woodside School felt a strong sense of community, but when their kids graduated and went on to high school, they lost it,” she said. “It occurred to me that there needed to be a place that wasn’t dependent on having kids.”

Hence the birth of Village Hub last year, which takes place on a corner of the church’s property Monday through Friday from 8:00 am to noon, serving up not only conversation and programs but organic espresso drinks and healthy snacks.

“To be honest, this corner of the property was unused and kind of a junk heap,” Ama said. “Now it is beautiful, and to me, beauty is an avenue into the spiritual whether or not you believe in God. Beauty uplifts the spirit.”

The programs offered speak to the fact that the Hub is open to everyone, be they religious, spiritual, atheist or just plain apathetic. Offerings include “Curious Minds” conversation, yoga, parents’ night out, living solo (for widows), guided meditation, and community acupuncture.

“It’s brought connections,” said Ama. “A woman who lives in Woodside but attends a Menlo Park church coordinates a group we call ‘spiritual hosts’ for drop in prayer. But, again, people don’t have to have any particular faith background to participate.”

Some events are sparked by other people’s actions. Recalled Ama: “When the Muslim travel ban was announced, a Woodside man posted on Nextdoor that he’d like to invite another family to dinner at his house to experience ‘Muslim hospitality.’ There was such an overwhelmingly positive response, we invited him here to share his story.

“We also hosted a Seder two weeks before Passover. It’s about healthy food and healthy community, and people coming together despite their differences. It is so satisfying to see that we’ve filled a need.”