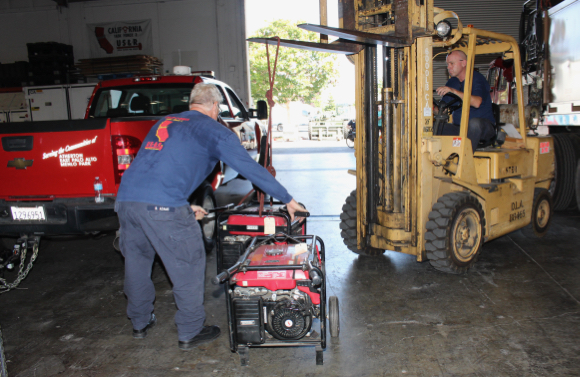 Members of Task Force 3, one of eight California State Office of Emergency Services (Cal-OES) Task Forces and one of 28 Federal Emergency Management Agency (FEMA) National Teams, headed to Texas this evening (8/27) on a 28-hour plus drive.

The Team deployed with a convoy of five vehicles and 10 boats in trailers from Menlo Park Fire District’s Special Operations Warehouse in Menlo Park at 6:00 pm Sunday evening. They were already in contact with other teams ahead of them to find out the best and open travel routes.

“Our main mission is to protect and serve our local communities first while sending out highly- skilled personnel to assist the people and State of Texas. Today’s requests will be balanced against personnel and units currently out on Wildland Fires along with maintaining our daily staffed positions in each of our seven Fire Stations.”

Several of the Team members responded to Hurricane Katrina, while others were involved with this year’s response to Oroville Dam, potential flooding in the Central Valley, and flooding along Coyote Creek in San Jose.