Taking a photo journey with David Hibbard on the Olympic Peninsula 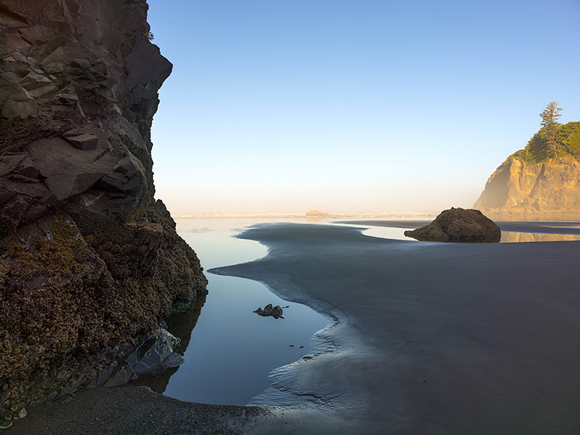 We were delighted to reconnect with Menlo Park-based photographer David Hibbard and take a photo journey with him around the Olympic Peninsula in Washington where he’d spent eight days that he described as “not long enough.”

He explained that he was just getting back into photography after a number of family responsibilities hindered his time in the field. “I’ve been photographing this coast for about 20 years,” he said. “I’m very, very drawn to it. It speaks to something in me.”

David shoots with a Phase One, a highly-specialized camera mainly used by commercial photographers. It’s a medium format, digital system. “With 100 megapixels in the sensor, the camera is capable of exquisite levels of detail,” he said. “It’s clearly not for everyone. It’s expensive, bulky and heavy, a chore to carry around. I pack all the gear into a backpack, including a large tripod, and that’s how I carry it around.”

We selected six of his photos and asked him to provide some comments, starting with the featured photo (top). The other descriptions follow in the order of the photos shown. 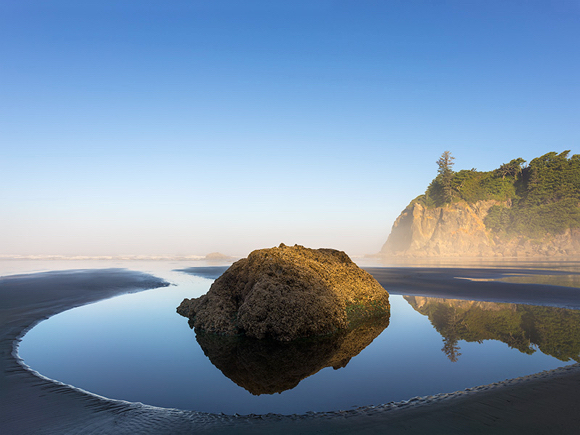 “What I like about this photo is the sinuous lines and the strong near-to-far perspective. It was an extraordinary gorgeous morning for the light with rich, deep shadows not he beach where was.

“For this shot, I used focus stacking. You take a series of shots, focusing the lens on a different distance, them merge them all in Photoshop. By doing this you gain sharpness and depth.”

Tree trunk on beach: “It was huge — 8 or 10 feet. The time was twilight, and I used a long exposure time, 80 seconds. Because the exposure is so long, the water is blurred. It was really dark. I had to do a lot of work in Photoshop to highlight the texture.”

Rock on circular pool: “The water was left by the retreating tide and the gradient of that beach is very gentle. The tide goes out a quarter of mile leaving standing pools of shallow water.  I was struck by the moment of it and took the shot in just a few minutes. The water was perfefctly still. There was no wind. The morning light just beginning to touch that rock. I just thought it was breathtaking.” 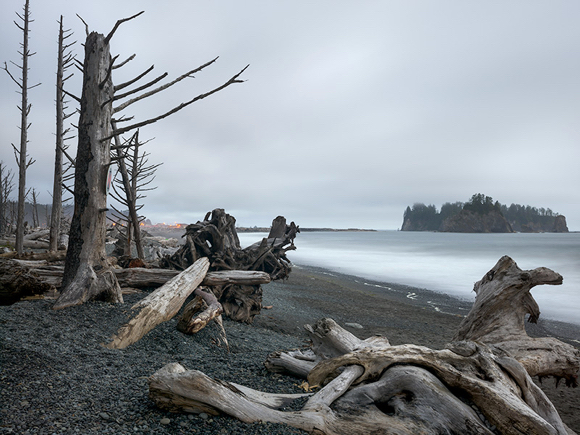 Driftwood under cloudy skies: “These beaches are strewn enormous amounts of driftwood. The surf brings them in during the winter, like some many match sticks. The orange lights are from the town of Lapush, a corruption French word la bouche – mouth. It is the western-most town on the lower 48 and it’s tiny. I like their warm glow  of the lights set amidst the drab gray.”

Driftwood in foreground with sea stacks on the horizon: “This is very characteristic of this coast. Sea stacks are remnants of headlands, eroded away over the millennia. They, too, will be eroded away. I was drawn to the line the driftwood makes against the ocean and again the light was gorgeous – twilight, the sun had already set. Technically, it was challenging image to print because the driftwood in foreground is very dark. I wanted to leave it dark but also to bring out some of the texture.”

Rock surrounded by white. “This was a cloudy morning on a flat beach short with a relatively long exposure time — 30 seconds. The ocean behind the rock is mostly blurred. The sand was very rippled. Even though long exposure blurs the ocean you still get a horizon line.”

David explained that he uses these trips to get back in touch with the natural world and spend solitary time. He’s planning an exhibit in 2018 in Seattle and is thinking about doing a book about his photo journeys to the area. 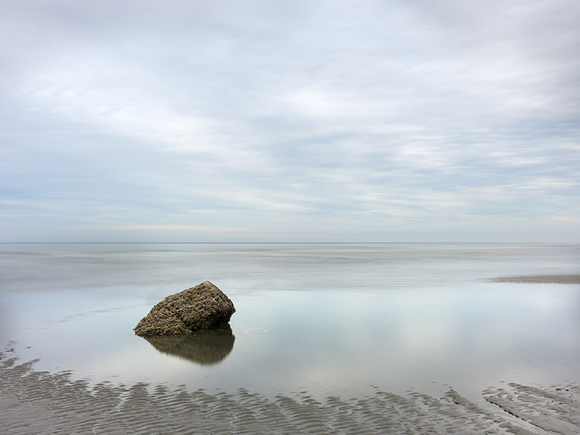