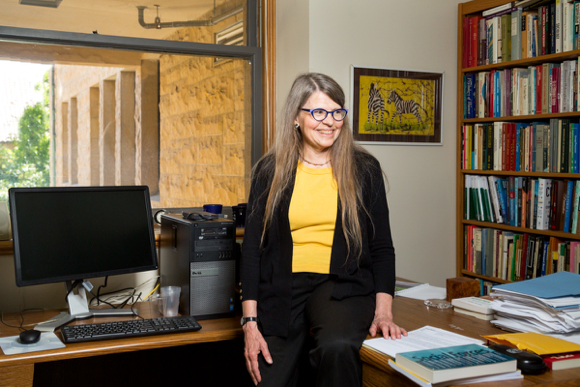 Menlo Park resident Cecilia Ridgeway grew up in a Los Angeles suburb that was a melting pot of sorts, “bringing people together from very different social worlds,” she explains. “My interest in sociology traces back to that experience. When I went to college, I was trying to figure out what to study, stumbled on sociology, and remember thinking, ‘Good heavens, people actually study this!'”

Today Cecilia is the Lucie Stern Professor of Social Science in the Sociology Department at Stanford University, where she teaches both undergraduates and grad students. Much of her research focuses on interpersonal status hierarchies, which are hierarchies of esteem and influence, and the significance of these hierarchies for inequalities based on gender, race, and social class.

“We view inequality in terms of resources — wealth, power, that sort of thing,” she says. “But there is another dimension of inequality that we kind of neglect, but it’s one that is important to us as individuals. This is the extent by which the community treats you with respect and values you as a member of the community.

“To put it bluntly, people get upset when they’re being dissed. Research shows that is one of the strongest triggers of anger in people.”

A few years ago, she wrote a book, Framed By Gender: How Gender Inequality Persists in the Modern World (Oxford University Press, 2011) in which she argued that it is the status value that shapes every day social relationships between men and women.

“For example, when women enter what has been traditional male jobs, the value in terms of status diminishes,” Cecilia says.

She’s now working on a new book, tentatively titled Why Is Status Everywhere?, that offers an analysis of status processes and their role in social inequality. “I think of it as the flip side to the gender book,” she says.

“Status is the oldest form of hierarchy in society. It becomes a means by which social difference within a group perpetuates itself.”

We finished our visit, which took place in her Stanford office, with a question about how she came to live in Menlo Park. “I knew that I didn’t want to live on campus in Stanford housing,” she recalls. “We had friends that lived in the Willows and we found it very pleasant. We still do!”