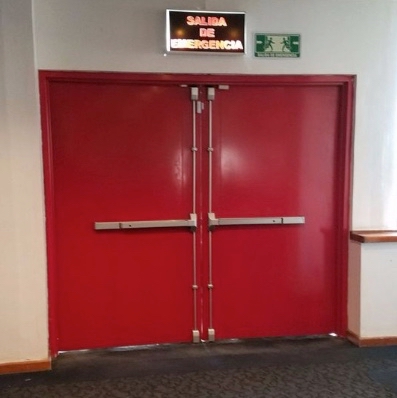 Editor’s note: We interviewed Brian Tucker of Menlo Park-based GeoHazards International a couple of years ago about the risk of earthquakes in populated areas of developing countries. Yesterday he reported the experience of the organization’s COO during Tuesday’s earthquake near Mexico City.

Emails Brian: “As a magnitude 7.1 earthquake shook Mexico City, Dr. Janise Rodgers, our COO, was there. Earlier that morning she gave an invited presentation about our work at a forum of the Mexican Society of Earthquake Engineering. Here is her firsthand report of what happened next:”

First, a drill...
The sirens went off at 11:00 am for a long-planned simulacro (earthquake drill) on the anniversary of the devastating 1985 Michoacan earthquake. At the national university, UNAM, attendees at the earthquake anniversary forum calmly walked outside through wide, clearly marked exits.

Exit doors at UNAM had safety features that are so often lacking in areas of the world where GeoHazards International works: They were painted red, opened outward, had panic bars so they could be opened quickly, and were kept unlocked.

Once outside, some people continued across the street to avoid standing underneath powerlines. Police assisting with the simulacro took photos. We headed back inside after the all-clear and resumed.

…then the real thing

About two hours later, the presenting speaker stopped mid-sentence as sirens went off again, accompanied immediately by noticeable shaking. In Mexico City, “go outside” is what you are told to do during shaking, so we all went outside again — more quickly this time. The shaking grew stronger, then subsided soon after we were out.

We had just practiced, so there was no hesitation, no questioning where to go or what to do. Power poles were swaying back and forth; fewer people stood under them this time. People poured into the street. Cars stopped. Everyone was on the phone trying to reach loved ones. For some minutes the networks were overloaded, like we always write about in earthquake scenarios.

UNAM is in a hilly part of the city, away from the soft lakebed sediments that so amplified shaking in 1985. Local engineers at the forum quickly expressed concerns that the shaking would have been much stronger on the lakebed part of the city.

Reports of building collapses trickled in, confirming their fears. Videos showing collapses of concrete and masonry buildings were circulating on social media an hour after the earthquake.

Our building was quickly inspected and found to be undamaged, so we went back inside. Despite the modest shaking, windows had broken on the building next door, demonstrating the vulnerability of older exterior cladding systems. The forum carried on, though the presenter had the unenviable task of talking with sirens still going off outside.

Local engineers continued to receive damage reports throughout the afternoon. Most distressing was the collapse of the Colegio Enrique Rebsamen elementary school, where at least 21 students had been killed at last report, and more were feared trapped under the rubble.

New schools in the city are designed to be earthquake resistant, but, as in many places, a stock of existing vulnerable buildings needs to be addressed. I hope this earthquake will spur action on that front.

Mexico made great investments in hospital readiness after the 1985 earthquake, and it seems to have paid off. A colleague told me that most hospitals remained functional, though no substantive details yet.

Concludes Brian: “Our hearts go out to those recovering from this major earthquake and its impacts, which are just coming to light.”

You can learn more about GHI and its work on the organization’s website.

Photo of door by Janise Rodgers, courtesy of GeoHazards International